This Is the Only Way To Deter Russia in Europe 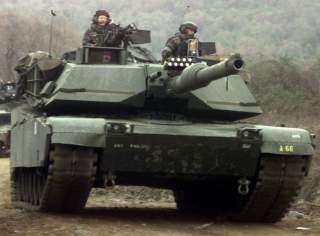 The U.S. Army is poorly deployed to assist NATO in deterring Russian conventional aggression against the Alliance. The U.S. Army is essentially based in the Continental United States (CONUS), while the likely place for conflict with Russia is on NATO’s eastern border. Recognizing this, over the past several years, the Army has been increasing its force structure in Europe. It has done so by rotating individual units, including Armored Brigade Combat Teams (ABCTs) into the continent. While a good first step, this may not be sufficient to deter Russia. Rather, what is required is the permanent stationing of U.S. and NATO forces, particularly heavy armored formations, in Poland.

Russian conventional forces are capable of conducting a rapid, high-intensity campaign against the states on its immediate western periphery. Latvia, Lithuania and Estonia – all NATO members – are particularly vulnerable to a conventional coup de main or surprise attack. But a move against Ukraine, Poland or Romania cannot be ruled out. The RAND Corporation has intensively analyzed the military balance in the Baltic region. The conclusions of this effort are, to say the least, sobering: “As currently postured, NATO cannot successfully defend the territory of its most exposed members.”

Fortunately, even after a decade of modernization, Russian conventional forces are a one-trick pony, capable only of limited offensive operations in areas immediately beyond their borders. The Russian concept of operations for conventional war is highly dependent on an initial surprise attack on opposing forces at the outset of hostilities. The Kremlin’s efforts to organize a national mobilization capability, which would be required in the event of a conflict with NATO, have been largely unsuccessful. Thus, the Russian military is designed to support a “smash-and-grab” strategy similar to what we saw in Crimea.

For deterrence of Russia to work, as the former head of U.S. Army forces in Europe, Lieutenant General Ben Hodges, observed, “you have to have real capability — the capability to compel or to defeat.” The outgoing Supreme Allied Commander, General Curtis Scaparrotti, stated that the deployment of additional U.S. troops and airborne ISR platforms in Europe “would help me do a better job of deterring Russia and set us in a better place to understand how Russia operates.”

The decision to send American ABCTs to Europe on heel-to-toe rotations is a good start. In 2017, two ABCTs were simultaneously rotated into Poland. One advantage of rotational deployments is the ability to employ these units continuously in presence and training missions. Another is the avoidance of the inevitable installation and transportation costs involved with creating permanent facilities to house soldiers and their families.

However, there are clear and important advantages to establishing a permanent and significant U.S. Army presence in Eastern Europe, particularly in Poland. First, such a force would complicate Russian planning for aggression, reducing the chance of a successful “smash-and-grab” attack. Second, a heavy U.S. deployment in Eastern Europe would be able to respond rapidly and effectively from the outset of hostilities while CONUS-based forces move to reinforce them. Mobile formations employing long-range fires, advanced aviation and layered air and missile defenses would disrupt the Russian ground offensive and disintegrate its integrated air defense system. Third, it is going to take U.S. expeditionary forces a long time to move from the middle of the U.S. to Eastern Europe, if European ports and airfields are even available. Finally, by attacking U.S. forces, the Kremlin would face the risk of escalating the conflict.

The U.S. should permanently station a strong Army presence in Poland. Initially, it would make sense to base a divisional headquarters and associated units there while continuing to rotate ABCTs into the theater. Once an adequate command and control structure is in place, the U.S. government should move to permanently base at least an armored division in that country. If the Army’s new concept for Multi-Domain Operations is to be successfully implemented, a full Army headquarters will be required in Europe to coordinate land with air and naval forces and direct advanced long-range fires, offensive electronic warfare, cyber operations and theater air and missile defenses.

The Polish Government proposed that the U.S. deploy a full armored division to Poland and offered to contribute up to $2 billion to support it. Warsaw also would invest in the infrastructure to support the presence of U.S. forces and their families. The presence of such a force would help improve the quality of Polish forces through joint exercises and personnel exchanges.

What NATO requires most of all to deter rapid Russian aggression is a sturdy iron curtain consisting of sufficient heavy land forces backed up by long-range precision fires and air and missile defenses. The permanent stationing of U.S. ground forces in Poland is the key to creating a credible and capable deterrent capability. Once the U.S. makes the move, it is likely that other NATO members will also base troops in Poland. Confronted by a unified Alliance that demonstrates its commitment to collective defense, Russia can and will be deterred.

Dan Gouré, Ph.D., is a vice president at the public-policy research think tank Lexington Institute. Goure has a background in the public sector and U.S. federal government, most recently serving as a member of the 2001 Department of Defense Transition Team. You can follow him on Twitter at