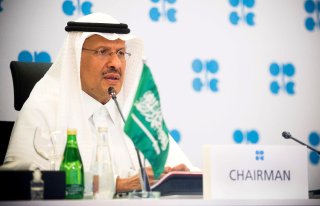 Oil prices jumped more than $3 a barrel on Monday as OPEC+ confirmed that it is considering reducing output by more than one million barrels per day to address ongoing oil market weakness, the Wall Street Journal reported.

OPEC+, which combines OPEC countries and allies such as Russia, has for months refused to increase output to tame global oil prices despite pressure from major consumers like the United States.

According to CNBC, “a significant production cut is poised to anger the United States, which has been putting pressure on Saudi Arabia to continue pumping more to help oil prices soften further and reduce revenues for Russia as the West seeks to punish Moscow for sending troops to Ukraine.”

If OPEC+ does go ahead with the plan, it would be the largest slash to production since 2020, when OPEC+ reduced output by a record ten million barrels per day in response to plummeting demand due to the Covid-19 pandemic.

“This winter, the European Union will cease, for the most part, buying Russian oil,” she said during an interview on CNN’s State of the Union.

“And, in addition, they will ban the provision of services that enable Russia to ship oil by tanker. And it is possible that that could cause a spike in oil prices,” she continued.

Meanwhile, per the latest AAA data, the national average price for a gallon of gas trekked higher by seven cents over the past week to hit $3.79.

“The regional differences in gas prices are stark at the moment, with prices on the West Coast hitting $6 a gallon and higher, while Texas and Gulf Coast states have prices dipping below $3 in some areas.” Andrew Gross, AAA spokesperson, said in a release.

“At least six California refineries are undergoing maintenance, and there is limited pipeline supply to the West Coast from locations east of the Rockies,” he continued.

“If demand remains robust as supply tightens, drivers should brace for rising pump prices through the weekend,” AAA concluded.