Operation Outward: The Brit’s Idea to Bomb Germany with Balloons 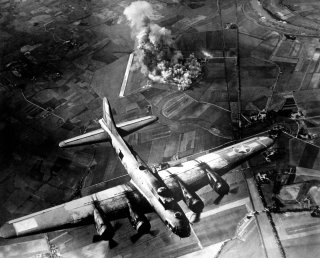 The British balloon-bomb plan happened by accident. One night in late 1940, a fierce storm ripped a number of British barrage balloons from their moorings (small zeppelin-shaped anti-aircraft balloons designed to damage enemy airplanes) across the North Sea and into Sweden and Denmark. The balloons, trailing long steel cables, caused widespread havoc when they came into contact with power lines, where they caused short-circuiting and were costly to repair. Winston Churchill liked the idea—and directed that balloons-turned-weapons be investigated.

Due to a quirk in pre-war German power line design, a cable that drifted across two or more lines had a very good chance of either causing a short circuit, or damaging the power line enough that it would be much more susceptible to the outdoor element and more likely to break in the future.

Additionally, balloons could be equipped with an explosive device, rather than just a simple steel cable or wire. Large swaths of Germany were covered in forest or flammable heath. If exploding barrage balloons posed a credible fire danger, then perhaps Germans who would otherwise contribute to the war effort could be assigned fire watching duty, and sapping German industrial output.

Weather conditions also favored the British Isles. High altitude winds tended to blow from west to east, leaving Germany much more vulnerable to balloon barrages than England was. Luckily, weather balloons were not in short supply.

The small latex balloons, a little under 10 feet across, would rise and expand to cruising altitude. Once the proper altitude was reached, an internally-housed rope would slowly release a small amount of hydrogen gas, preventing the balloon from expanding and rising further. The balloons were also equipped with a long fuse that would hopefully reach the end of its burn once the balloon was over Germany.

One of the balloon’s main weapons was a long strand of steel wire which would snake out underneath the balloon, attaching to power lines for causing general havoc. But there were also bombs.

One of the explosive devices was code-named Beer. A metal canister would carry several white phosphorus grenades internally. Once a long fuse burned out, the canister would drop its fiery contents onto hopefully dry pine needles or grass below.

Another device was called socks. Actual socks were tied end-to-end and packed with thinly-cut wood shaving and soaked in wax. These dangling feet warmers were equipped with fuses that would ignite the highly flammable contents, hopefully making contact with trees or buildings.

The other notable ordinance was Jelly — it was just like what it sounded like, a can of incendiary jelly that was equipped with a fuse mechanism that would detonate on the ground, creating a large fireball.

Although the impact of the barrage balloons is hard to gauge, some reports can be drawn on to give an idea of how successful Operation Outward was. Some secondary reports from foreign country news sources reported that damage to German power lines had been sustained, and that intermittent, hard to explain fires had popped up here and there in the German countryside. In addition, German fighters were sometimes used to bring down balloons that had been spotted. Costs in fuel, ammunition, and inconvenience were higher than what it had cost the British just to build the balloon, justifying their use. Operation Outward was a success.