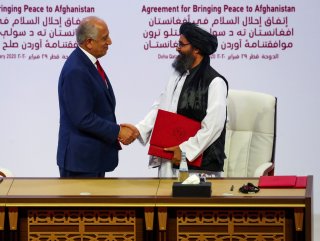 If a real estate broker sold a house that did not belong to his client, he would end up in jail for fraud. If a cinema sold tickets to a film it was not showing, customers would demand refunds. And if a newspaper published coupons for a restaurant without its permission, it would be sued. Yet ambitious American officials continue to bargain with what they do not control and then act surprised when commitments go unfulfilled and plans go awry.

The most recent case involves Afghanistan. The desire to end America’s longest war may be the only thing that still unites President Donald Trump and progressive Democrats. Enter Special Envoy Zalmay Khalilzad, who argued behind-the-scenes that the Taliban had changed: They had grown more nationalist, Khalilzad said, and they recognized that they could not meet their objectives militarily. Over the course of the next eighteen months, Khalilzad negotiated with the group’s representatives in Qatar, often cutting out the Afghan government and ignoring the roots of violence: Pakistan’s terror sponsorship, Taliban cooperation with Al Qaeda and the Taliban’s refusal to recognize Afghanistan’s elected government.  The Taliban calculated that Khalilzad—like Secretary of State John Kerry during the run-up to the Iran deal—was so desperate that they could win ever more extravagant concessions. In the end, Khalilzad promised the Taliban that the Afghan government would release 5,000 insurgents, never mind that the elected government was not party to the agreement.

At the February 29, 2020, signing ceremony for the Agreement for Bringing Peace to Afghanistan,” Secretary of State Mike Pompeo was cautious. “We will closely watch the Taliban’s compliance with their commitments and calibrate the pace of our withdrawal to their actions,” he said. That promise was ephemeral. Rather than acknowledge failure or hold the Taliban to account, U.S. and allied forces in Afghanistan have stopped releasing data on “enemy-initiated attacks.”

Post-peace deal, the Taliban are resurgent and show little desire to negotiate peace with Afghanistan’s elected government. They have seized upon the Afghan government’s confusion and reticence over the prisoner release to shirk responsibility for their own actions. The elected Afghan government should have been under no obligation to release prisoners on behalf of diplomacy to which it was not party but, out of frustration, U.S. officials blamed them for the failing agreement rather than consider American over-promising was the poison pill.

The same diplomatic phenomenon condemned President Barack Obama and Secretary of State Hillary Clinton’s efforts to win Middle East peace. Even before winning the presidency, Barack Obama signaled that he would prioritize Israel-Palestinian peacemaking. In August 2008, he wrote to Palestinian Authority President Mahmoud Abbas whom he subsequently met in Ramallah. Abbas found a sympathetic ear in the Illinois senator, and began to send Obama reports on Israeli settlement activity.

Coached by historian and former Palestine Liberation Organization spokesman Rashid Khalidi, Obama sought to recalibrate the American position. He agreed to make Israeli settlements the top priority.  Over subsequent months, both Clinton and Special Envoy George Mitchell met with Abbas and promised a tougher U.S. stance toward Israel.  On May 28, 2009, standing next to Abbas at the White House, Obama demanded a halt to Israeli settlement activity. He made no distinction between outposts far from Jewish populations and construction on existing homes within Jerusalem’s post-1967 neighborhoods. Rather than take discussions to the next level, Obama’s promises to Abbas about Israeli positions gave Abbas an excuse to stop talks, and effectively set diplomacy back a decade, if not more.

The same diplomatic over-commitment transformed the Bush-era “surge” in Iraq from success to failure. Put aside the myth cultivated by Gen. David Petraeus and some Bush administration alumni. The importance of recommitting the United States to victory in Iraq was important, but the military reality was more complex. Some insurgents simply went to ground for tactical or local political reasons only to re-emerge months later, while other violence diminished as groups completed sectarian cleansing in contested regions.

Those most invested in the narrative of the surge’s success blame Iraqi Prime Minister Nouri al-Maliki’s sectarianism for Iraq’s subsequent sharp descent into civil war. Certainly, Maliki was (and is) both sectarian and corrupt. But sectarianism is a two-way street. The empowered Sunni militias were just as sectarian as Maliki. Petraeus’ empowerment of Sunni tribal militias both rewarded their previous violence and encouraged Sunni powerbrokers to eschew political compromise. Petraeus’ commitment that an already financially-strapped Baghdad pay the salaries of extra-constitutional Sunni militias was not only illegal under Iraqi law but hastened Iraq’s subsequent political breakdown. In effect, the surge—and the commitments Petraeus imposed on Iraq—paused violence in the short-term, but guaranteed an explosion in the long-term.

Diplomacy is seldom easy. In generations past, diplomats would strive to find formulas which could resolve problems and advance peace. Sometimes they succeeded, and other times they failed. There was always a sense of strategic patience, however. Presidents, secretaries of state, and generals understood there were no short-cuts and diplomacy and that the United States could not force allies or adversaries to conform to the American political calendar. Alas, that lesson has been lost. There are no short-cuts and the efforts to impose them by promising what the United States neither possesses nor controls will always catalyze violence, not peace.

A former Pentagon official, Dr. Michael Rubin has lived in post-revolution Iran, Yemen, and both pre- and postwar Iraq, and he spent time with the Taliban before 9/11. He is the author, co-author, and co-editor of several books exploring Iranian history, American diplomacy, Kurdish studies, and Shi’ite politics, including Kurdistan Rising (AEI Press, 2016), Dancing with the Devil: The Perils of Engaging Rogue Regimes (Encounter Books, 2014); and Eternal Iran: Continuity and Chaos (Palgrave, 2005).