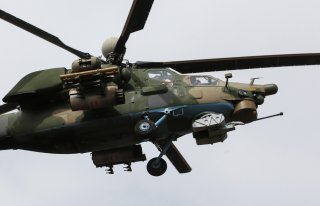 Given the sheer size and reported sophistication of the Russian Air Force, many are wondering what is behind Russia’s inability to achieve air superiority over Ukraine.

Global Firepower reports a massive discrepancy in airpower between Russia and Ukraine; Ukraine is reported to operate 69 fighter aircraft, while Russia has a fleet of 772. Russia is known to operate a sizable fleet of fourth-generation fighter jets and it is already producing its fifth-generation Su-57 stealth fighter. However, the Pentagon still reports that the airspace above Ukraine is contested.

There are several known and widely discussed reasons for this, including the tenacity with which the Ukrainians are resisting Russian attacks and, perhaps most notably, the effectiveness of Ukrainian air defenses. This may be one key reason why senior Pentagon officials say Russian airplanes simply aren’t very active in Ukrainian airspace.

“They don't spend much time in Ukrainian airspace. They get as close as they need to get to, to drop, and now that they're dropping more dumb bombs, they've got to get much closer. And then they deliver their payload and they go back. And they go back home into Russia,” the official said.

The official added that “the Russians are still very capable of launching strikes, and a lot of them they're launching from inside their own territory.”

For quite some time, the Pentagon has said that Russia continues to be risk-averse with its pilots over Ukrainian airspace, suggesting that Ukrainian air defenses are having a rather decisive impact.

The Ukrainians operate a collection of Cold War-era, Soviet-built surface-to-air missile systems, the most modern of which is the SA-15 Gauntlet, first produced in 1986. But how much have these decades-old systems been maintained and upgraded? In addition, the Ukrainians have been working with various Western partners to obtain more Russian-built S-300 air defenses. Do they have other cutting-edge air defenses as well? Some of this might not be known, but the Pentagon does make it clear that Ukrainian forces are employing very effective air defense tactics.

“The Ukrainians continue to be very nimble in how they use both short and long-range air defense. And they have proven very effective at moving those assets around to help protect them,” a senior defense official said Monday.

At the same time, there is a less obvious but potentially crucial variable at play: Russia’s small fleet of stealth fighters. Russian newspapers report that the Russian military now operates a small number of stealth Su-57 fighter jets, with plans to build seventy more in the coming years. It is not known if Russia is using its small Su-57 fleet in Ukraine. However, regardless of the relative sophistication of the Su-57 in terms of its stealth technology, there simply are not enough of them to pose a substantial threat. Not only that, but there are no signs that they are operational in Ukraine.

Perhaps fourth-generation Russian planes simply cannot elude modern Ukrainian air defenses? That would appear to be the case. Therefore, while Russia’s inability to secure airspace over Ukraine may still be somewhat of a mystery, it would seem self-evident that they are suffering from a lack of available stealth technology and simply cannot compete or survive.