PAK-DA: Meet Russia's '6th-Generation' Bomber (And It Will Be Stealth) 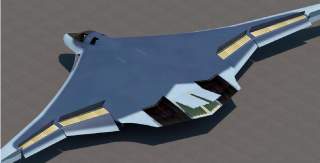