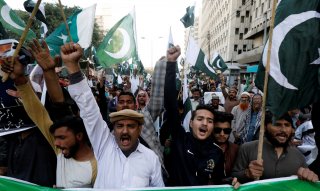 The Islamic State Khorasan Province (ISKP) claimed the Kabul explosions that killed more than 100 people, including thirteen U.S. marines. Following the attack, ISKP, hitherto a second fiddle in the Afghan conflict theatre, emerged as a new target of the global war on terror and is providing a new rationale for U.S. intervention. Moreover, it is leading some to have a rosier view of the Pakistan-backed Taliban, which are now being viewed as a counterweight to ISIS.

However, ISKP is also a Pakistani proxy that is thriving under Islamabad’s patronage. Most of ISKP’s cadres include disgruntled elements from the Taliban, Tehrik-i-Taliban Pakistan, and Pakistan’s other proxy groups like Jaish-e-Muhammad (JeM) and Lashkar-e-Taiba (LeT). The rest include foreign fighters from Uzbekistan, Kerala (India), etc.

In the Afghanistan-Pakistan region, there are numerous heavyweight proxies that are supported by the Pakistani Inter-Services Intelligence (ISI) like the Haqqani Network (HQN), JeM, LeT, and the Taliban. Given these groups’ presence, it is almost impossible for a new organization to survive without the blessings of the Pakistani Army’s General Headquarters in Rawalpindi. Reportedly, since its formation in 2015, the ISI has infiltrated ISKP with a sizable number of its cadres from LeT, JeM, and HQN.

Since the ISKP and Taliban are competing for recruits, territory, and revenue sources, a lay observer understands that they are sworn enemies. However, the groups have much in common. Ideologically, the Taliban and ISKP are both Sunni extremists aiming for a sharia-ruled Islamic society. Until recently, NATO forces and the Afghan government were their common enemies, and in regard to their brutal treatment of women, non-Muslims, and Shias and Ahmadiyyas religious minorities, the Taliban and ISKP are more or less on the same page.

With Pakistan-sponsored terrorist groups, it is common to overlook ideological differences and work on tactically compromising towards larger objectives. For example, in Kashmir, JeM, a Deobandi terrorist group with generational ties to the Taliban—as the Taliban also subscribes to Deobandi ideology—comfortably works with groups with differing ideologies such as LeT, a Salafi group, and Hizbul Mujahidin, which subscribes to Maulana Maududi’s version of political Islam. Al Qaeda, a Wahhabi outfit, has maintained close ties with the Taliban and affiliated Deobandi groups like JeM and Harkat-ul-Mujahidin. Then, there are marriage and tribal ties between the different groups. Due to these aforementioned reasons, most of these groups are interconnected. Hence, there is no reason to believe that ISKP and the Taliban are sworn enemies due to perceived ideological differences. If some disgruntled individuals deserted the Taliban to join ISKP, it mainly was over leadership clashes, turf wars, and the distribution of financial resources from opium smuggling.

Interviews I had with informed interlocutors in Pakistan suggest that key figures in ISKP have had links with individuals and entities associated with the Pakistani ISI since the group’s inception. Further, this claim was substantiated through my conversations with members of India’s intelligence fraternity. In 2016, they found compelling evidence of Pakistani agencies radicalizing Indian youth from Kerala on ISKP’s behalf. Reportedly, they also assisted them in moving to the ISKP stronghold in the Afghanistan-Pakistan region through third countries.

Ismail Punjabi, an Indian national who is reportedly in charge of ISKP’s foreign fighters, was a LeT cadre before joining ISKP. He worked with LeT between 2003-07 and was involved in planning the Mumbai Taj attack (2008) in which several U.S. citizens were killed. Later, he joined Al Qaeda before transferring to ISKP. He was killed in 2016. Abdul Rahim Muslim Dost, ISKP’s former religious head, was an Afghanistan-based former militant commander and a key member of Kunar-based Salafi group, Jamaat-ul-Dawa-al-Quran, which maintained close ties with LeT.

Huzaifa al-Bakistani, an ISKP commander who is in charge of the group’s operations in Kashmir, was also an ex-LeT cadre and close to ISI. He was a relative of Aijaz Ahmad Ahangar, known as alias Abu Usman al Kashmiri (a resident of Srinagar), who also joined ISKP. Previously, Ahangar was with Tahreek-ul-Mujahidin (TuM) and Harkat-ul-Mujahidin (HuM), two other Pakistan-backed terrorist groups operating in Kashmir. Ahangar is also a son-in-law of Abdullah Ghani Dar, known as Abdullah Ghazali, former commander of TuM and LeT. ISKP chief Aslam Farukhi, the mastermind of the Kabul gurudwara attack, which killed twenty-seven Sikhs, is also an ex-LeT member. After his arrest in Kandahar, Pakistan asked for his extradition because the ISI feared he would reveal too much about his links to Pakistani intelligence. Another influential ISKP leader, Abdul Haseeb Loghari (an Afghan Taliban defector), was an alim (a religious position) with HQN before he joined the group.

HQN, also known as the Taliban’s sword arm, has maintained a close relationship with the Taliban and Al Qaeda. Its chief, Sirajuddin Haqqani, is the deputy commander of the Taliban. Notorious for its suicide bombings, HQN has conducted many deadly attacks in Afghanistan, killing many American and Afghan soldiers. It also runs a vast criminal drug trafficking enterprise. Had it not been for the ISI’s deep-rooted provision of training, weapons, safe heavens, and finances, HQN would not have endured for the last twenty years.

ISKP has collaborated with HQN in several tactical and strategic matters. Aslam Farookhi’s interrogation revealed highly synchronized operational dynamics between ISKP, JeM, HQN, and LeT. ISKP individuals received training at JeM camps at Chaman and Tolandi in Pakistan. The LeT provided operatives and identified targets in Afghanistan which could generate socio-political and economic concerns. Through its control of vast criminal resources and military muscle, HQN helped with logistics and coordination. ISKP worked on propaganda, provided the recruits, and claimed the attacks. Farookhi’s revelations helped the Afghan police neutralize several ISKP networks that were intertwined with the Haqqanis.

Having discussed the interconnected and overlapping nature of terror groups in the Afghanistan-Pakistan region, it becomes clear that the ISI is the common denominator among all of them.

Following the recent Kabul blasts, it is worth questioning ISKP’s claims. HQN has been managing Kabul’s security as it is a natural choice given its vast resources, military muscle, ties with the Taliban, and ISI’s backing. Also, a senior Pakistani army major-general was reportedly in Kabul to oversee the security and other affairs in the days following the Afghan government’s collapse. It stretches credulity to understand how members of a second-rung terror group, reportedly having strong ties with HQN, managed to breach the Kabul airport’s high-security zone, bypassing rigorous security checkpoints and committing an act of terror. Any objective analysis is incomplete without exploring whether others, including HQN, Pakistan, or the Taliban itself provided tacit support to ISKP.

Thus, we must also consider who benefits from the aforementioned blasts, especially since the Americans are leaving and the Taliban needs international recognition. Indeed, neither the Taliban nor HQN owned up the attack. Instead, by taking responsibility, ISKP has served its purpose.

First, the attack has demolished French president Emmanuel Macron’s idea of establishing a safe zone at Kabul’s airport for civilian evacuations after August 31, the U.S. withdrawal deadline, and also put brakes on the evacuation of Afghans who assisted coalition forces. Second, raising the specter of ISKP enables Pakistan to project the Taliban as a responsible actor—the so-called “good guys”—and compel the Americans to support Pakistan and Taliban in fighting ISKP and via military and financial assistance. Third, the Taliban’s projection as a responsible and reformed entity offers some respite and much-sought-after justification for the United States’ withdrawal decision, at a time when Washington is facing colossal embarrassment because of its hasty and bungled withdrawal. Fourth, with U.S. help, the Taliban is likely to weed out anti-Taliban and anti-Pakistan factions in ISKP, gaining some plaudits for contributing to the war on terror.

Given the ISI’s history of intelligence operations, it is not challenging to understand how Pakistan’s nexus with ISKP furthers Islamabad’s objectives. Pakistan has raised many two-tier proxy groups with secular names in Kashmir after the first layer got exposed. For example, The Resistance Front (TRF) is a LeT offshoot. The People’s Anti-Fascist Front (PAFF) is JeM’s proxy. LeT and JeM stand exposed as Pakistan-backed terror groups, and any attacks claimed by them may invite a harsh reaction by the Financial Action Task Force (FATF) against Pakistan.

Hence, since raising multiple proxies gives Pakistan deniability, the ISI is using the same model in Afghanistan. For example, luring Indian nationals into ISKP and inducing them to target Indian interests in Afghanistan has offered convincing deniability to Pakistan compared to using known proxies like LeT and JeM. Likewise, since Pakistan’s links with the Taliban and HQN are well-known, it is nurturing ISKP for three reasons: to maintain a degree of plausible deniability, to project an image of also being a victim of terror, and to make the Taliban more acceptable to international actors.

There is a strong likelihood that ISKP will claim responsibility for more attacks on Western and Indian targets in the region soon. Moreover, Pakistan’s double game of keeping up the pretense of being a U.S. ally against terror while sheltering, funding, and training terrorist groups with U.S. aid money is likely to continue. The only difference now is that ISKP has replaced Al Qaeda and the Taliban as America’s latest antagonist. Regardless, as long as the Pakistani Army’s General Headquarters in Rawalpindi continues to play its bloody and covert intelligence game from behind the scenes, innocent Afghans will continue to suffer.