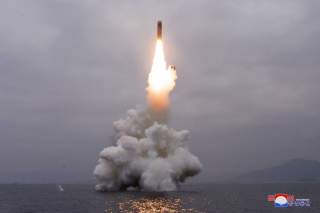 Key point: Pyongyang’s nukes are here to stay and it is better to find some solution now, rather than wait for a crisis later.

Last Friday, after a long hiatus, US and North Korean officials resumed their negotiations on denuclearisation of the Korean peninsula. Later that same day, the North Koreans walked out, citing the Americans’ ‘outdated viewpoint and attitude’. Not an ideal start. But don’t despair: the prospects for some sort of limited accord emerging in the coming months are good. Both sides want a deal—not the same deal, true, but they might yet find enough common ground to make a start on what can only be a long-term task.

Two issues will be prominent in North Korean leader Kim Jong-un’s thoughts. First, the sterling work done by his rocket scientists since the test flight of the Hwasong-15 ICBM in late 2017 has materially strengthened Pyongyang’s hand at the negotiating table. Some of the North’s short-range missiles have been redesigned, apparently to allow them to fly lower and flatter trajectories—complicating the tracking and interception missions of regional ballistic-missile defences. And a recently tested solid-fuelled submarine-launched ballistic missile—although tested from a sub-surface platform rather than an actual submarine—performed well, suggesting North Korea’s making progress on adding a sea-based leg to its nuclear arsenal. All of that makes for a happy Kim.

But in another area, Kim is much less happy. The sanctions-hit North Korean economy is struggling: Seoul’s Bank of Korea estimates the economy shrank by 4.1% in 2018, on top of a 3.5% slump in 2017. Even the weather’s being unkind. The UN Food and Agriculture Organization is predicting that 2019 will see the smallest crop production in five years, bringing serious food shortages to about 40% of the population. In short, sanctions are biting and famine is looming. That weakens Pyongyang’s hand at the negotiating table and Kim’s domestic profile. For much of his reign, he’s been photographed visiting fish farms and food factories.

US President Donald Trump, meanwhile, is probably relieved to see talks resume. He’s copped a fair amount of flak for pulling the plug at the Hanoi summit in February and subsequently trivialising North Korea’s campaign of ongoing missile testing. His personal commitment to Kim through the hiatus in negotiations has been impressive—including his willingness to step across the border in North Korea during the brief meeting between the two at the demilitarised zone.

Kim has previously said that it’s important to have an agreement by the end of the year, now a mere three months away. The reasoning behind that deadline may have more to do with the onset of the presidential race in the US than with any specific North Korean timeline. Kim might well fear that any 2020 agreement would quickly become a political football. Trump, of course, wants a quick agreement for exactly the opposite reason: he hopes to brandish it in 2020 as a sign of his competence in relation to a difficult problem where other presidents have stumbled.

So there are valid reasons to believe that something might come out of this new round of negotiations. That doesn’t mean we’re remotely close to a full and final denuclearisation of the Korean peninsula. Such an agreement could be in place by New Year’s Eve only if the work was already 90% of the way there. Some exchanges have been occurring—in early August, for example, Trump spoke of a three-page letter from Kim. But both sides seem some way away from a full-blown accord.

Indeed, media reports are starting to signal that a more limited agreement is probably the more likely outcome—something that lifts specific sanctions for a set period in exchange for specific forms of North Korean nuclear restraint. That sort of agreement might well be acceptable to both sides as a halfway house which allows them to monitor each other’s bona fides. The agreement would be more than a simple trust-building exercise. The US needs something that would bear down on the North’s nuclear capability and test Pyongyang’s tolerance for greater transparency of its nuclear and missile programs. Pyongyang needs something that increases its sense of security and eases its economic difficulties.

The terms of any limited agreement will be hard fought. And North Korea’s compliance with previous arms control measures is perhaps kindly described as ‘patchy’. So, what should the world expect? Well, Trump’s primary objective will be to wind back threats to the US homeland. He’ll want to reverse the large strategic gains North Korea made in 2017, when it successfully tested two different intercontinental ballistic missiles and a thermonuclear warhead with a yield of about 250 kilotons.

At a minimum, any agreement has to lock down the two unilateral moratoria granted by Kim at the Singapore summit in June last year—a cessation of nuclear tests and ICBM tests—for the simple reason that, unless they are formalised, Kim can withdraw them whenever he chooses. Nowadays the Twitterverse works itself into a mini-frenzy with each new North Korean missile test. A resumption of ICBM testing would be much more serious.

But Washington can’t simply sign up to something that prioritises US security at the expense of the security of its allies in Northeast Asia. An agreement would also need to make inroads into North Korea’s current and future nuclear capabilities, by prohibiting future fissile material production, accounting for existing warheads and outlining a credible program for their destruction. That means Kim has to agree to open up Yongbyon, his main nuclear facility.

That’s going to be difficult for a whole host of reasons. So, watch for a partial agreement, not a full one—and, probably, more walkouts as the rubber starts to hit the road. Still, a series of halfway-house agreements—a sort of Zeno’s paradox version of denuclearisation—may eventually give us a largely nuclear-free Korean peninsula.

This article by Rod Lyon first appeared in the Australian Strategic Policy Insitute’s The Strategist in 2019.

Rod Lyon is a senior fellow at ASPI.