Patriotism Gap? A Third of Young Americans Think Other Countries Are Better 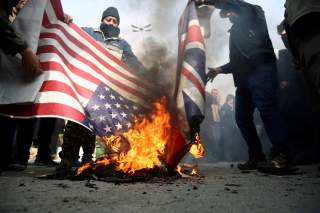 Younger Americans are more likely than older adults to think other countries are greater than the United States, poll results show.

Polling conducted by the Pew Research Center found that 36% of 18- to 29-year-old Americans think other countries are greater than the United States — the highest share of any age group, Pew noted Wednesday.

And almost half of young Democrats and Democratic-leaning independents, at 47%, say that there are better countries than the U.S. About a third of Democrats ages 30 to 49 believe this as well. This compares to the 19% of young Republicans who say other countries are superior to the U.S. and the 4% of Republicans 50 and older who hold the same view.

Shares of Americans who say other countries are better than the U.S.:

“The American education system—especially colleges and high schools—have fed the rising generation an endless stream of biased and incomplete lessons that paint the United States as an evil empire rife with horrific injustices,” Brown said.

“It’s a shame that people around the world—such as the freedom fighters in Hong Kong—do a better job of acknowledging our precious freedoms that are taken for granted by educators here in the United States,” Brown added.

Pew conducted the survey from Sept. 3 to Sept. 15 on Pew Research Center’s American Trends Panel, a nationally representative panel of randomly selected U.S. adults who participate in the panel through self-administered web surveys. The research center released the data in December as part of a larger study on partisanship and politics, Pew told the DCNF.