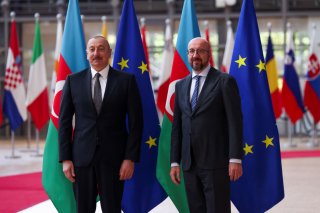 In September, Armenia and Azerbaijan renewed their battle over the contested territory of Nagorno-Karabakh. Significant escalation occurred on September 13, when Azerbaijan upped the ante and attacked cities along Armenia’s border. With all eyes fixed on the devastating Russo-Ukrainian War being waged on the periphery of Europe, this conflict might seem like a secondary priority. Nonetheless, the Nagorno-Karabakh dispute between Armenia and Azerbaijan is the oldest post-Soviet conflict in Eurasia, and it threatens what should be Europe’s highest priority: securing alternative energy sources that bypass Russia.

Preceding this recent round of skirmishes, a ceasefire brokered by Russia ended the 2020 Nagorno-Karabakh War. In the agreement, Russia committed to maintaining 1,960 “peacekeeping” troops in the region. But the war in Ukraine has spread Russia thin, and Moscow needs all its troops to sustain combat operations there. An August report from Politico noted that Russia had begun redeploying these “peacekeeping” troops to Ukraine.

By attacking cities on Armenia’s border, Azerbaijan has taken advantage of Russia’s withdrawal but has undermined its relationship with Europe, which would rather maintain peace and engage in commerce with new partners. If the Azerbaijani government plans to engage with the West reliably, peaceful relations with its Caucasian neighbors should rank high on the agenda, especially when fighting takes place around a vital oil and gas transit corridor as it did in 2020. These corridors are Azerbaijan’s most significant asset in its engagement with Europe.

Washington has done the right thing by allowing Europe to take the lead in quelling violence in the Caucasus. By taking matters into its own hands, Europe can reinforce its strategic autonomy to focus on areas that are most pertinent to its security and energy concerns.

Before Vladimir Putin’s war in Ukraine, the West’s interest in engaging the South Caucasus was relatively low. However, new political and economic realities have changed this perspective. One of Putin’s primary leverage points against the West is his threat of cutting off Russian energy supplies to Europe. Moscow has acted on these threats by significantly reducing gas supplies to Europe, operating at just 20 percent of the agreed-upon volume before an indefinite suspension of Nord Stream 1. Given that Russia supplied 40 percent of the European Union’s (EU) natural gas and 27 percent of its imported oil before the invasion of Ukraine, another energy option is drastically needed, especially considering that Europe has limited options to import energy overland.

In fact, there are only three ways for energy and trade to flow overland between Asia and Europe: through Iran, Russia, or Azerbaijan. Additionally, the three major oil and gas pipelines, the Baku-Tbilisi-Ceyhan (BTC) pipeline, the Baku-Supsa pipeline, and the Southern Gas Corridor, pass through a sixty-mile chokepoint in Ganja, Azerbaijan. The BTC and Baku-Supsa pipelines are capable of transiting 60 million and 7.2 million tons a year, respectively. The Southern Gas Corridor, built to diversify the EU’s natural gas supply, has the capacity to deliver 31 billion cubic meters of gas between its South Caucasus Pipeline and Trans-Anatolian Natural Gas Pipeline, as well 20 billion cubic meters through its Trans Adriatic Pipeline.

Europe must grapple with this reality and capitalize on a prosperous relationship with Baku. The EU signed a new energy agreement in July that would double gas imports from Azerbaijan to Europe. This energy agreement states that 4 billion cubic meters of gas will be delivered to the EU by the end of 2022. The EU and Azerbaijan plan to increase supplies to a minimum of 20 billion cubic meters annually by 2027.

These energy initiatives with Azerbaijan, a country that is becoming increasingly friendly towards the West, give Europe a reason to look after its own energy concerns. Along with the economic benefits of free trade, pursuing greater energy connectivity with Europe will make Azerbaijan a more relevant regional power and a preferable partner to Russia. While increased trade with Azerbaijan will surely not solve all of Europe’s energy woes, it remains a much-needed alternative to Russian energy in dire times.

Peace treaties and ceasefires have failed to prevent repeated clashes between Armenia and Azerbaijan, primarily due to Russia's unreliability, which has supplied weapons to both sides and profited from the conflict. With Russia diverting its troops to Ukraine, Azerbaijan and Armenia now have the opportunity to work with reliable European partners and secure a lasting peace, which has remained elusive in the region since the Soviet period. By assisting in quelling this conflict, Europe has shown that it too can look out for its own interests.

Alex Little is an MS graduate of Georgia Tech and specializes in Russian and Central Asian affairs.