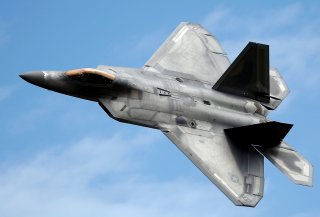 In a mysterious, yet seemingly urgent “irregular patrol” call, two U.S. Air Force F-22 jets were scrambled into action recently from Joint Base Pearl Harbor-Hickam. Following the launch of the two F-22 jets, a third one was called into action along with a KC-135 Stratotanker refueling aircraft to provide support.

The incident, detailed in a report from The War Zone, explained that the request came from the FAA, however, no additional details were available regarding the nature of the incident that caused the scramble.

What happened? The actual circumstances remain quite mysterious, a circumstance which can of course send imaginations on quite a journey, yet there are a few factors to consider it seems.

The first possibility, raised by The War Zone, is simply that there was a concern or potential security issue onboard a commercial airliner of some kind, requiring additional security measures.  However, that may not fully explain why a third F-22 jet was sent along with a tanker, developments which seem to suggest there may have been some reason why additional firepower and a possible prolonged engagement requiring refueling may have been necessary.

Perhaps a passenger airliner was closely approached, tracked or intercepted by some kind of foreign or potentially hostile aircraft? Perhaps something flew close enough to cause serious concern for commercial pilots? None of this is known, however, The War Zone report also makes the point that if the F-22 jets needed to fend off a hostile intercept, for instance, by a Russian or Chinese fighter coming dangerously close, then details of those kinds of incidents are typically made public. Following a provocative move by Russian or Chinese aircraft in some fashion, the Pentagon regularly publishes statements condemning irresponsible or provocative behavior. The silence and secrecy surrounding this “irregular patrol” certainly invite speculation that the circumstance may have been quite serious to some extent.

Following the incident, no additional details have been made available, apart from a general FAA statement given to The War Zone stating that “the FAA has a close working relationship with the military.”

There may have been a possibility that F-22 jets would need to escort or secure an airplane for a huge distance, given the vast expanse of the Pacific Ocean, something which might explain why a tanker was included as well. A KC-135 refueling aircraft could certainly help double the flight range of F-22 jets should their continued presence be required.

There is always the possibility that the event or “situation” was actually not particularly serious and that the fighters were scrambled merely as a precaution. However, that does not explain the rapid addition of a third F-22 jet and a tanker aircraft.  Even if the event was not extremely serious, the silence about details may simply be due to an interest in tactics, techniques and procedures. This can often be the case in circumstances where, even if the details about what happened are not sensitive, revealing them could give potential adversaries insight into “how” the information was learned, therefore creating a need to safeguard “methods” of gathering information.