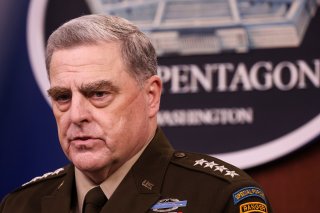 The Defense Department is accelerating a program designed to bring an entirely new dimension to missile-warning operations. It is engineering a new Overhead Persistent Infrared (OPIR) detection system to identify the heat signature generated by the launch of an enemy missile as well as establish a flight track of a threat as it transits through space.

It is unsurprising that the Defense Department is moving quickly to deploy this new missile detection technology in light of the growing Chinese missile threat. China has new weapons, and more of them are capable of reaching the United States.

“Commercial satellite imagery discovered what is accepted to be nuclear missile fields in Western China. Each has nearly 120 ICBM silos,” Adm. Charles Richard, the commander of U.S. Strategic Command, said at the Space and Missile Defense Symposium in Huntsville, Alabama.

The OPIR-Integrated FORGE system helps architect the technical apparatus to gather, store, safeguard and network OPIR related sensor information. It involves synchronizing fixed ground terminals with other nodes such as air and space assets; it also leverages cloud technology. In effect, when SBIRS sensors detect the key indicators of an important mission event, the data is then pooled, organized, analyzed and made available to key decisionmakers. This process will be substantially faster, more streamlined and comprehensive when networked with the merging OPIR system.

The Air Force’s strategic vision regarding the evolution of modern space and air warfare, as thinking regarding a technical and tactical transition from SBIRS to OPIR has been evolving along an interesting and highly impactful trajectory.

Analysis written by Jeffrey K. Harris and Gilbert Siegert and published by the Air and Space Journal shows that the strategic transition was inspired in large measure by the advent of new technical platforms such as OPIR and data application systems such as FORGE. The duo explained in their analysis, titled Missile Warning Augmentation: a Low Risk Approach, the advent of “disaggregation,” which is part of a broad discussion about the architectural transition concepts from SBIRS to OPIR.

“Initial concepts introduced by the center include changing from the space-based infrared system (SBIRS) to a wide field of view (WFOV) disaggregated approach,” according to the analysis.

This WFOV is exactly what OPIR seeks to establish. It is not more precise, cyber-hardened, resilient and networked, and removes any potential “gaps” in the GEO orbit in which a target could be tracked.

“Although the OPIR mission area has existed for decades as overhead non-imaging infrared with SBIRS and other systems, it is now the new kid on the block, integrating target-signature nuances, time, and place into persistent intelligence and operational products,” according to the analysis.

By operating without risky “gaps” in coverage, OPIR can perform the increasingly crucial task of establishing a continuous “track” on a fast moving threat, such as hypersonics. There is great concern with certain threats, which move beyond the earth’s atmosphere into space at unprecedented speeds, transitioning from one radar aperture field of view into another. As a threat travels from one segmented field of view to another, it can get lost and make it extremely difficult for sensing systems and networks to establish a continuous “track” of a fast target such as a hypersonic missile traveling at five times the speed of sound.

This is the reason why OPIR is being engineered with a decided emphasis upon what military personnel describe as “upgradeability,” meaning it is architected with a set of common, modular technical standards such that it can easily accommodate or integrate next-generation sensing technologies as they emerge.