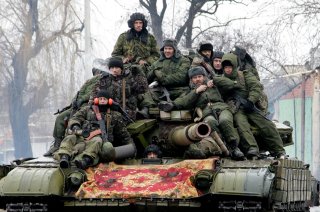 One-fifth of Ukraine is under Russian control, according to Ukrainian president Volodymyr Zelenskyy.

“As of today, about 20% of our territory is under the control of the occupiers, almost 125 thousand square kilometers. This is much larger than the area of all the Benelux countries combined," Zelenskyy said on Thursday in an address to Luxembourgian lawmakers, according to CNN.

Zelesnkyy’s comments come on the heels of steady Russian advances in the eastern Donbass region, where the Russian military is slowly forging ahead with its strategy of encircling pockets of Ukrainian troops while choking off major Ukrainian cities from supplies and reinforcements. The Ukrainian President said earlier that up to 100 Ukrainian soldiers are being killed daily on the war's eastern front. “The situation is very difficult; we’re losing 60 to 100 soldiers per day as killed in action and something around 500 people as wounded in action. So we are holding our defensive perimeters​,” he told Newsmax in an interview published on Tuesday.

The eastern Ukrainian city of Severodonetsk is now almost fully under Russian control, with Russian media reporting that the brunt of the fighting is shifting to the outskirts of the neighboring Ukrainian-held city of Lysychansk. Oleksii Hromov, deputy head of the Operations Directorate of the General Staff, rebuffed earlier claims that Ukraine’s military command is planning to approve a major withdrawal to prevent its forces from being enveloped. “At this time, in the plans of the command, the General Staff, there is no need for our military units to withdraw from the [Severodonetsk] area,” he said, as per CNN. The Russian military reported late last week that all three major bridges leading out of Severodonetsk have been destroyed or rendered unusable, trapping the city’s defenders inside.

The Severodonetsk-Lysychansk salient is the last major Ukrainian stronghold in Donbass’ Luhansk region. The bulk of Russian forces in the area are expected to resume their offensive in the direction of Sloviansk, a strategically significant Ukrainian-held city just to the west of Severodonetsk that has seen a steady cadence of Russian airstrikes in prior weeks. Russian gains in the country’s east threaten to deprive Ukraine not just of its industrial heartland, but of several key wheat-producing regions.