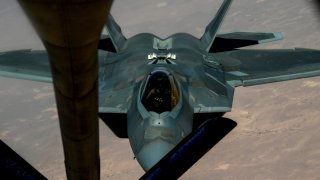 The Pentagon is blitzing the Pacific with the addition of as many as twenty-five combat-ready F-22s to Guam, a clear display of 5th-Generation air dominance power poised to respond quickly in the event of some kind of fast-emerging conflict.

A report in Forbes Magazine says the newly arriving F-22s, from both Joint Base Elmendorf-Richardson, Alaska and Joint Base Pearl Harbor-Hickam, says the arriving 5th-generation aircraft will be training, practicing, and preparing for a potential war with China.

While this certainly sends a message regarding U.S. resolve in the region to deter any potential Chinese aggression and likely demonstrate support for Taiwan, the presence of the F-22 also brings a few tactical and operational variables to mind.

For instance, the F-22 is referred to by developers as an “aerial quarterback,” given its ability to employ high-end sensors and communications systems to connect with any accompanying 4th-gen aircraft. This means it is not entirely impossible, particularly given more recent technological upgrades with RF links and communications systems to the aircraft, that the F-22 could function as part of a dispersed, integrated combat network of “nodes” across a massively dispersed area.  While the Pacific is widely referred to as presenting a “tyranny of distance” for U.S. and allied forces in the region, the proximity between Guam and Taiwan, coupled with the speed and rapid deployment ability of the F-22, means they could quickly take off to defend Taiwan to counter any kind of Chinese invasion.  This introduces the prospect of close air support, because while the F-22 was primarily intended for air-to-air dominance warfare, the jet is also capable of air-ground attack as was demonstrated in 2014 during the jet’s combat debut against ISIS.

Then there is the question of F-22 weapons, which have been overhauled with a massive 3.2b software upgrade in recent years, giving several of its air weapons vastly expanded combat attack capability.

Another part of the weapons upgrade includes engineering the F-22 to fire the AIM-120D, a beyond visual range Advanced Medium-Range Air-to-Air Missile (AMRAAM), designed for all-weather day-and-night attacks; it is a "fire and forget" missile with active transmit radar guidance, Raytheon data states.

All of this raises the key strategic question as to whether the F-22 would prevail in any kind of war against Chinese 5th-generation J-20s or J-31s. Many regard the F-22 as the most dominant air-to-air dominance fighter jet in the world, something which an actual aerial combat engagement against Chinese aircraft could demonstrate in the event of war.