The Pentagon Is Bringing Allies Onboard for Project Convergence 2022 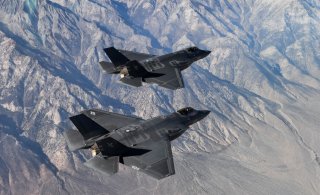 Australia, Canada, New Zealand, and the United Kingdom are all lined up to participate in the Army’s upcoming Project Convergence Campaign of Learning in the Arizona desert, a yearly experiment that attempts to use AI-enabled computing, manned-unmanned teaming, hardened transport layer networks, and collections of disaggregated sensors to massively shorten the amount of time it takes to identify, attack, and destroy an enemy target.

Project Convergence is often described as getting ahead of an enemy’s decision cycle by passing otherwise disparate pools of data through a high-speed, AI-capable database to compare information and make instant determinations according to a host of seemingly disconnected variables

“Project Convergence is really that way in which as the Army and then as a member of the joint force, we can bring this short warfighting concept to light and begin to experiment with how we fight as a joint team. We've got coalition partners that are participating in [Project Convergence 2022], how do we fight as a coalition?” Maj. Gen. John Rafferty, director of the Long Range Precision Fires Cross-Functional Team at Army Futures Command, told the National Interest in an interview.

The U.S. military is now breaking through with joint interoperability due to common internet protocol standards, the often discussed open architecture approach, and ongoing efforts to engineer technical “interfaces” to enable disparate networks and pools of data to share information. International connectivity is progressing as well, but linking networks and communications systems between countries can prove more difficult. Addressing this challenge is exactly why the Army seeks to expand Project Convergence to include key international partners. Should British fighter jets, for instance, be able to send targeting information about enemy ships to U.S. Navy warships or ground-fire units, then the battlefield envelope of operations would be further extended and threats would be more easily recognized and destroyed. Instead of connecting U.S. Army infantry with Marine Corps F-35Bs, perhaps U.S. Army forces would share data with a British or Australian F-35 as well.

In coordination with efforts to solidify international connectivity, the Army is taking steps to ensure that Project Convergence 2022 aligns with the rigors of combat and successfully replicates a modern threat environment. Enemy targets will likely become more elaborate, high-tech, and dispersed this year, as the exercise seeks to build upon its success from the last two previous years.

“We also have a part of Project Convergence ’22 that's really focused at what I'll call the front sight post, its brigade combat team Combined Arms real hard Army fighting. How are we taking these technologies and adapting them to how we're going to fight in the future with feedback from our soldiers in the field right now?” Rafferty asked.

NATO countries, in coordination with other U.S. allies, have for many years been working on common protocols and formats such as video data links, radio frequencies, and other methods of interoperability to generate seamless combat connectivity. Certainly, it would serve NATO and other U.S. allies extremely well.