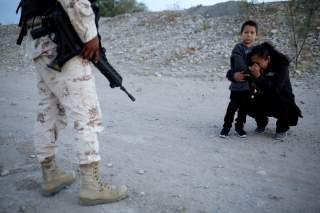 The Pentagon’s Office of Inspector General has opened a review into President Donald Trump’s deployment of military personnel to the U.S.-Mexico border following calls from Democratic lawmakers.

The Inspector General’s office will evaluate the legality of military personnel and resources deployed at the southern border, per an announcement released Tuesday by the Pentagon’s internal investigative body. The review will examine the military’s support of security operations in the region, the training given to personnel, coordination between the military and the Department of Homeland Security (DHS), and funding related to the military’s deployment.

The chief of the Pentagon’s OIG office went into further detail about the decision to investigate military involvement at the border.

“Based on several requests, we have decided to conduct an evaluation, in accord with our standard processes, to examine the use of military personnel along the southern border,” acting Inspector General Glenn Fine said in a statement obtained by ABC News.

“In this evaluation, we will examine, among other issues, what they are doing at the border, what training they received, and whether their use complied with applicable law, DOD policy, and operating guidance,” Fine continued. “We intend to conduct this important evaluation as expeditiously as possible.”

The decision to launch a review comes after more than 30 members of Congress, all Democrats, wrote a letter to the Fine in September demanding that his office look into the matter. In the letter, the lawmakers suggested Trump’s deployment of troops was “operating under dubious legal authorities” and “upending” the country’s democratic system.

Trump, who has made control of the southern border a central theme of his administration, first deployed National Guard members to the region in April 2018. Later that year, over 5,000 active duty forces were stationed in the region to assist the DHS in managing the illegal immigration crisis.

The administration currently has about 6,500 National Guard members and active duty troops stationed along the southern border. These forces are largely playing supportive roles for Customs and Border Protection — the agency within DHS that deals with immigration enforcement — and does not directly engage with foreign nationals attempting to cross illegally.