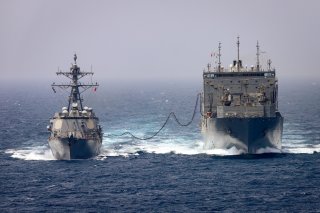 The Pentagon is making a pointed effort to correct statements in a Chinese readout of a meeting between Defense Secretary Lloyd Austin and his Chinese counterpart that claimed the United States “adheres” to the One China principle.

The claim, which was made in a Chinese summary of the high-level phone call on April 20, appears to suggest that the United States would not oppose a Chinese takeover of Taiwan. Pentagon spokesman John Kirby rejected that claim, reiterating that the United States remains committed to the Taiwan Relations Act, which supports the continued sale of U.S. arms to Taiwan.

“The PRC Ministry of National Defense published a readout of their own which erroneously claimed that the United States adheres to the One China principle,” Kirby explained.

As part of a comment regarding the impact of U.S. support for Ukraine, Kirby stated that the Pentagon remains focused on the Indo-Pacific theater and the “pacing challenge” of China.

“And if you look at our budget, which is a big one—$773 billion—a record number of dollars dedicated to research and development of new kinds of capabilities,” Kirby said. Underlining the importance of the region to the United States, he noted that “five of our seven treaty alliances are in that part of the world.”

Kirby went on to clarify that the military aid being sent to Ukraine in no way diminishes the United States’ ability to maintain a strong deterrence posture and respond to threats in the Indo-Pacific. The equipment being sent to Ukraine, Kirby said, is from existing “drawdown material” that the United States’ military readiness is not dependent on.

The Pentagon’s proposed budget reflects a clear and growing emphasis on the Chinese threat. In particular, the budget’s priority on research and development reflects the Pentagon’s efforts to identify breakthrough technologies that can propel the United States to military superiority.

Most of the assets would be in high demand during a conflict in the Indo-Pacific, but they are likely quite different from the land warfare weapons currently being sent to Ukraine. For instance, in order to disrupt or stop a potential Chinese amphibious assault on Taiwan, the United States would likely rely most heavily on forward-operating naval assets, submarines, and drones. The intent could be to stop an invasion before Chinese forces are able to secure land on Taiwan and occupy the island. If Chinese forces did seize the island, defending Taiwan would require an extremely dangerous and costly ground war extraction campaign. However, should armed drones, warships, submarines, and ship-launched fifth-generation fighter jets stop an amphibious landing on approach, any attempt to defend Taiwan could have strong prospects for success.