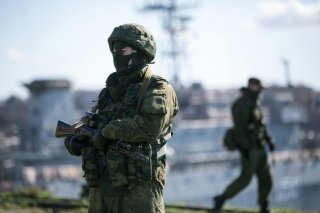 The U.S. government claims to have uncovered information on a Russian plot to launch “false flag” attacks against Russian forces in order to justify a military intervention.

“We … have information that the Russians are likely to want to fabricate a pretext for an invasion,” Kirby said, characterizing such an action as “right out of their playbook.” The spokesman indicated that Washington intended to publicize its intelligence as a way to discredit the potential plot. “We’ve seen these kinds of activities by the Russians in the past, and we believe it’s important when we see it like this—and we can—to call it out,” he added.

Kirby speculated that the “highest levels of the Russian government” are usually responsible for planning and executing similar operations, strongly implying that the Pentagon considered Russian president Vladimir Putin responsible for the plan.

The intelligence was shared with Washington’s NATO allies. British foreign secretary Liz Truss described it as “clear and shocking evidence of Russia’s unprovoked aggression” in a statement released on Twitter. “This bellicose intent towards a sovereign democratic country is completely unacceptable and we condemn it in the strongest possible terms,” Truss added.

The crisis along Russia’s border with Ukraine has escalated as Russia has positioned tens of thousands of additional troops near the border in what Western sources describe as a preparation for a possible invasion. At least 130,000 Russian soldiers are now present along the border, and an additional 30,000 could soon be in Belarus along Ukraine’s northern frontier, according to NATO Secretary General Jens Stoltenberg.

The crisis has led several Western countries to provide the Ukrainian military with military aid, and President Joe Biden announced earlier in the week that U.S. troops would be deployed to several Eastern European nations, although he ruled out a similar deployment to Ukraine.

As the crisis has continued, Russia’s political relationship with the United States and other NATO members has steadily deteriorated. On Thursday, the Russian government banned the German state-run Deutsche Welle media outlet in retaliation for Germany’s ban on the Russian state-run RT network.