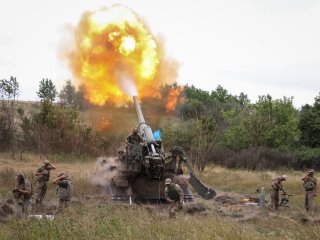 Secretary of Defense Lloyd Austin praised Ukraine’s “demonstrable success” in its ongoing counteroffensive against Russian troops in the southern Kherson region during a meeting outlining the contents of the United States’ latest military aid package to Ukraine.

Austin’s remarks came at the opening of the Ukraine Defense Contact Group, an organization of Western allies created to coordinate and plan long-term aid to Ukraine, at the United States’ Ramstein Air Base in southern Germany. The secretary of defense emphasized that the war had now reached a “key moment,” adding that Kyiv’s Western backers “need … to position [themselves] to sustain Ukraine’s brave defenders for the long haul.”

“Now we’re seeing the demonstrable success of our common efforts on the battlefield,” Austin added, referencing the ongoing counteroffensive. He also announced that an additional $675 million in military equipment, including 105mm howitzers and GMLRS precision-guided rockets, had been set aside for Ukraine by the Biden administration, noting that it had been the “twentieth drawdown of equipment from U.S. stocks for Ukraine since last August.”

As part of further aid to Ukraine, Austin recommended that U.S. allies pursue “innovative” ways of “reinvigorating [the West’s] defense industrial bases to match both Ukraine[‘s] priorities and our own needs.”

On the same day as Austin’s comments, Secretary of State Antony Blinken announced that the United States would provide an additional $2 billion in military aid to Ukraine and other European countries that have transferred Soviet-era equipment to its armed forces.

Over the past two weeks, Ukraine has made slow but steady progress in the southern Kherson region, inching closer to recapturing the southern provincial capital that Russian troops seized from Ukraine during the first week of the war. U.S. commentators have also observed that a “surprise offensive” in the region of Kharkiv, Ukraine’s second-largest city bordering Russia, had successfully recaptured several Russian positions to the east of the city.

Although Ukraine is not thought to have sufficient troops to launch a full-scale assault on Kherson—and lacks other strategic advantages, such as uncontested air superiority over the region—it has pursued a strategy of starvation and attrition, bombing attempted resupply missions from Russian-occupied territory across the Dnieper River to the contested city. Unusually, Ukraine’s armed forces telegraphed the move against Kherson weeks in advance, giving Russia time to reinforce the city and the surrounding areas—largely with troops and equipment taken from the Donbass region in eastern Ukraine, where much of the ongoing fighting has been concentrated until the present.