The Pentagon is Preparing for China’s ICBM Double Down 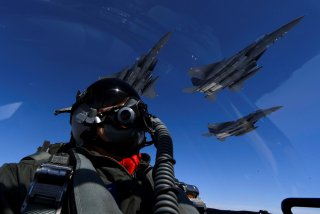 The Pentagon wants to make sure it can track and take out enemy intercontinental ballistic missiles flying through space to the United States. This concern has been raised due to increasing global tension, the arrival of more low-yield tactical nuclear weapons, and the pace at which Russia and China are modernizing and expanding their respective nuclear arsenals.

The Pentagon is fast-tracking its new Next-Generation Interceptor (NGI) weapon intended to introduce a new paradigm for ICBM defense with advanced sensors able to better discern decoys and countermeasures from missiles and the possibility of firing multiple kill vehicles from a single interceptor. However, the new NGI is not slated to arrive until 2028 and the Missile Defense Agency needs to ensure that it can sustain a viable and highly effective Ground-Based Interceptor (GBI) for several more decades until sufficient numbers of the NGI are available.

Therefore, as nuclear threats grow more pressing, the Pentagon is continuing a multiyear upgrade and sustainment campaign for its arsenal of GBIs now based in Fort Greely, Alaska, and Vandenberg Air Force Base, California.

Many of the upgrades have been in the realm of computing and command and control to avoid obsolescence and ensure continued connectivity in terms of targeting, flight path and sensing. Increasing software upgrades are a way that existing hardware can be adapted to meet emerging threats and enhance performance without having to be fully reconfigured.

“The big concern back when layered homeland defense was first discussed was the concern that the existing fleet would start to lose its reliability over time while we also had this timeline for next-generation interceptor off to the right,” Hill said. “Now we have a Service Life Extension Program and we’re moving out there and that will increase and give us a hardware-based data capacity to really understand reliability.”

Russia continues to massively modernize its nuclear arsenal to include the addition of hypersonics as well as low-yield weapons spanning a wide range of threats and China is believed to be doubling its number of ICBMs in upcoming years.

Kris Osborn is the defense editor for the National Interest. Osborn previously served at the Pentagon as a Highly Qualified Expert with the Office of the Assistant Secretary of the Army—Acquisition, Logistics & Technology. Osborn has also worked as an anchor and on-air military specialist at national TV networks. He has appeared as a guest military expert on Fox News, MSNBC, The Military Channel, and The History Channel. He also has a Master’s Degree in Comparative Literature from Columbia University.“