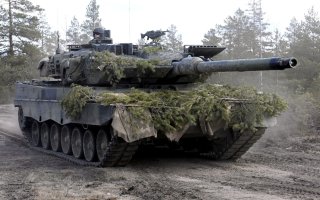 According to U.S. defense secretary Lloyd Austin, both Finland and Sweden are “close” to joining NATO, a development which would further reshape the alliance’s security posture in Europe.

“Now, NATO is also close to welcoming two new members to the Alliance, and Finland and Sweden have made the historic decisions to apply for membership, and that reflects the appeal of NATO's core values,” Austin said following a meeting with NATO secretary-general Jens Stoltenberg in Brussels, Belgium.

Sweden and Finland joining NATO would significantly impact the alliance beyond simply expanding its size and geographical reach. For instance, Finland has formally joined the F-35 stealth fighter program alongside a growing group of European countries that are participating in multinational F-35 formations across the continent. But the most considerable impact is that Finland borders Russia, meaning that its membership would open up an enormous Northern corridor through which NATO could enter Russian territory if needed. Part of this proximity also means that short- and medium-range ballistic missiles would be in position to reach deeper into Russian territory if a conflict takes place between the alliance and Moscow.

These geographical dynamics pertain not only to armored formations or fifth-generation air power but also to surveillance. Finland’s proximity to Russia means that next-generation drones and surveillance planes can obtain real-time video feeds from strategically critical areas within Russia much more quickly. From a purely tactical point of view, having both Sweden and Finland as NATO members would immeasurably strengthen NATO’s deterrence posture and prospects for victory in the event of a major war with Russia, even if it would significantly expand the amount of European territory that the alliance would need to defend.

Force deployment is another critical variable because, if NATO needed to mass large formations, Finland offers ample space and a direct route to Moscow.

Although Poland is also getting F-35 Joint Strike Fighters and M1 Abrams tanks, forces gathered there would be in a less advantageous position for rapid deployments or force-staging as they would need to first transit Belarus or Ukraine in order to access the Russian border. On the Finnish border, however, there is vast open terrain upon which to stage large, heavy ground forces in preparation for a land incursion into Russia.

This would be critical if NATO needed to use armored formations against Russia, given that they are difficult to deploy and have trouble traveling by air. A large land force would also need time to assemble, prepare, and stage.

Yet the most significant advantage of all of this may be that the entire Scandinavian Peninsula, an area surrounding the Baltic Sea, will become part of NATO—greatly increasing the alliance’s access to the Arctic.