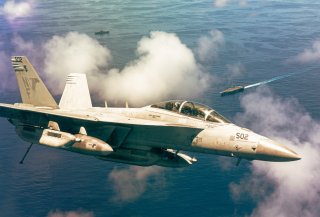 The Pentagon has announced that six U.S. Navy EA-18G Growlers are being deployed to Germany to support the United States’ “deterrence mission.” There is little question that the arrival of the Growlers will bolster NATO’s deterrence posture, as these electronic jamming aircraft are able to locate and jam the signal of enemy air defenses.

The Growlers have been sent to Germany “in order to bolster readiness, enhance NATO's collective defense posture and further increase air integration capabilities with our allied and partner nations," Pentagon spokesman John Kirby said in a statement on Monday. "These Growlers ... are equipped for a variety of missions. But they do specialize in flying electronic warfare missions, using a suite of jamming sensors to confuse enemy radars, greatly aiding in the ability to conduct suppression of enemy air defense operations."

While advanced electronic warfare (EW) weapons of this kind can prove extremely effective against mobile enemy air defenses, including those operated by the Russian military, a senior defense official said that “they are not there to engage Russian assets.” Growlers are often deployed to complete suppression of enemy air defense operations, which use electromagnetic signals to detect the electronic signature of enemy air defenses and then disrupt, jam, or completely disable them.

Mobile EW weapons would also play an important role in responding to any potential Russian invasion of NATO territory in Eastern Europe. Most notably, Growlers could help neutralize Russia’s mobile S-300 and S-400 air defenses. The Growlers’ ability to maneuver in the air is of great operational value, as it increases survivability and makes them less detectable to enemy radar. Once an electromagnetic signal is emitted in any capacity, it creates an electronic signature that can potentially be detected by hostile forces. However, should the emitter be able to quickly reposition, as would be the case with a Growler, the enemy would struggle to detect and track the emitting signal. In the event of a Russian assault on a NATO ally, Growlers could patrol the skies and jam or disable Russian air defenses.

Looking forward, the Growler will soon be equipped with the Next-Generation Jammer (NJG), a new EW warfare system. The NJG will enable a single system to jam multiple frequencies at the same time and discern electronic signatures at greater distances and with much greater fidelity.