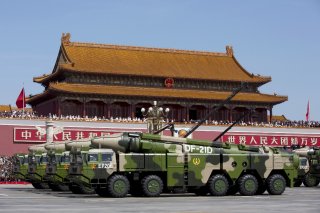 “We are witnessing a strategic breakout by China including explosive growth in modernization in nuclear and conventional forces which can be described as breathtaking. It does not matter why China continues to grow and modernize. They are building the capability to execute any nuclear employment strategy. China is unconstrained by treaties. Business as usual will not work,” Adm. Charles Richard, the commander of the U.S. Strategic Command, said before an audience at the 2021 Space and Missile Defense Symposium in Huntsville, Alabama.

There are additional Chinese capacity variables that only compound U.S. concerns about the threat. China has a large and fast-growing number of nuclear weapons to include ICBMs and two nuclear missile fields in Western China, each with 120 missiles, Richard said.

Richard was clear that there are metrics and technological variables far more significant than sheer numbers when it comes to the actual size of a given country’s number of nuclear weapons.

“I caution about a comparison of stockpiles. A nation’s stockpile is a crude measure, as you need delivery systems and range as well,” Richard explained.

Additionally, Richard mentioned the crucial significance of arsenal size and capacity, saying that although the United States now has more ICBMs than China, that margin of difference is rapidly diminishing. The Pentagon’s 2020 China Military Report, for example, specifies that China will likely double the size of its nuclear stockpile over the next decade.

“Mass matters or quantity has a quality all of its own. Does not matter if our stuff is better, if you don’t have enough of them you still lose,” Richard said.

Richard made his comments in the context of deterrence theory and Defense Secretary Lloyd Austin’s call for “integrated deterrence.”

“To achieve integration every domain must be considered,” Richard said.

Finally, Richard concluded his remarks with an interesting reference to what could be called an enduring paradox of deterrence, essentially ensuring massive, devastating destruction with nuclear weapons for the explicit and clear purpose of maintaining peace.

“Nuclear weapons systems are the only weapons for which you don’t have to pull the trigger for them to be used effectively,” Richard said.