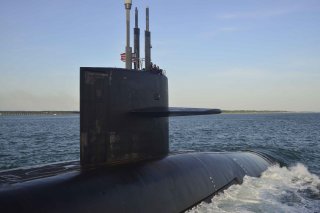 One tactical advantage to a weapon of this kind, naturally intended to prevent nuclear war, is that it ensures a catastrophic, yet targeted nuclear response option in the event the United States is attacked with nuclear weapons.

The modification effort is intended to align with the Nuclear Posture Review (NPR) released several years ago by the Trump administration and Pentagon, which calls for the introduction of several new lower-yield nuclear weapons.

The new SLBM brings a third warhead option for a nuclear attack. As it currently stands, the Trident can carry the W76-1 or W88, Pentagon officials have told TNI.

Low-yield is as it sounds—smaller, more surgical and less destructive than most nuclear weapons. While some experts say a low-yield weapon could be in the range of twenty kilotons, senior Pentagon officials told TNI that “there is no formal definition of what is low yield and what is not. It is a term of art used in arms control but we have not set a limit.”

This low-yield nuclear missile option does appear to add something not currently present in the U.S. arsenal. While the emerging B-21 will be configured to fire lower-yield, more precise B61 Mod 12 weapons, a submarine-launched nuclear weapon brings newer avenues of attack and long-range strike without having to operate air assets over or near heavily defended areas. The F-35 is also being engineered to carry nuclear weapons.

Yet another proposed nuclear weapons application, according to those identified by the NPR, is a shorter-range sea-launched cruise missile. Nuclear cruise missile options, potentially fired from a submarine or ship, can bring even more precision.

A sea-launched cruise missile could include a handful of possibilities. The Pentagon previously had a nuclear-armed Tomahawk missile, which was retired in 2011.