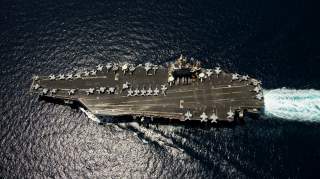 The Pentagon's regional command for Europe wants more destroyers and aircraft carriers in order to deter Russian aggression on the continent.

But there's a problem. The U.S. Navy is struggling to add ships, and has even proposed to cut a carrier from the fleet.

The general said he also wants a "better pace" of carriers and amphibious ships deploying to European waters, according to USNI News reporter John Grady.

The Navy could struggle to provide the additional vessels. As of early 2019 the U.S. fleet possessed 287 large warships. In December 2016 Ray Mabus, then the Navy secretary, concluded the fleet needed 355 ships in order to meet the demand from regional commanders such as Scaparrotti.

The bigger fleet should include 12 nuclear-powered aircraft carriers, Mabus advised. In early 2019 the fleet operated 11 carriers.

The Trump administration endorsed Mabus's force-structure goal. But manufacturing and maintaining extra new ships would cost as much as $23 billion a year, according to the Congressional Research Service. And the Navy’s annual shipbuilding budget for years had been around $15 billion.

Under one scenario, sustainably growing to a dozen flattops could take until the 2060s, according to one assessment. Adm. John Richardson, the chief of naval operations, in a February 2019 conversation with reporters signalled lower expectations regarding fleet size.

In late February 2019, The Washington Post broke the news that the Navy wants to decommission one aircraft carrier before its mid-life nuclear-refueling in the early 2020s, thus cutting the carrier fleet from 11 vessels to 10 and making it more or less impossible for the Navy ever to maintain 12 flattops.

Breaking Defense confirmed that USS Harry S. Truman is the carrier on the chopping block. The vessel commissioned in 1998 and, with a mid-life refueling, could operate well into the 2040s. Retiring Truman in the 2020s could save the Navy $30 billion over a 25-year period, Breaking Defense estimated.

But Congress likely will overrule the Navy and keep Truman in service. There is "zero" chance the House Armed Services Committee will approve the decommissioning, said Rep. Joe Courtney, a Connecticut Democrat and the chair of the HASC seapower subcommittee.

If Congress saves Truman, Scaparrotti may well get his extra carrier deployments. But he might not be so lucky when it comes to the extra destroyers.

The four destroyers in Spain primarily conduct missile-defense patrols, sailing in circles in European waters in order to be in a position to fire interceptor missiles in the event Iran launches a ballistic missile toward the United States.

The Navy dislikes the missile-defense patrols, which also occupy two destroyers operating out of Japan. "You have to be in a tiny little box to have a chance at intercepting that incoming missile," Chief of Naval Operations Adm. John Richardson explained. "So, we have six ships that could go anywhere in the world, at flank speed, in a tiny little box, defending land."

If he had his way, Richardson might pull the destroyers from Spain and assign them to other regional fleets. The added flexibility could result in more destroyers deploying to Europe more frequently. Then again, it might not, if the Navy favors requests for forces from regional commanders in the Pacific.

The Navy's struggles to grow weigh on these choices. With fewer additional destroyers than it hoped to acquire, the Pentagon might have to make hard choices regarding where it stations and deploys the ships.

The rapid advent of robotic warships could complicate fleet planning. The fleet has done "a lot of work ... over the last six or seven months" preparing to formalize programs for large, remotely-operated vessels, Rear Adm. William Galinis, the Navy's executive for surface ships, told the Surface Navy Association in January 2019.

A robotic warship, while smaller than a destroyer, could cost just a few tens of millions of dollars to build, compared to the nearly $2 billion it costs to build a new destroyer. In theory, the Navy quickly could acquire large numbers of unmanned corvettes.

One essayist argued that robot vessels immediately should replace the flotilla of small patrol boats the Navy keeps in Bahrain for missions across the Persian Gulf. The fleet likewise could send robot ships to beef up regional fleets such as EUCOM's.

But unmanned warships still are years away from entering service in large numbers. Scaparrotti has been clear that his command's needs are urgent. "We’ve got to modernize," he said. "We do need greater capacity."