Is the Pentagon's New Hypersonic Missile Enough to Keep Pace With Russia and China? 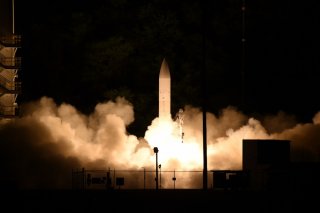 “The missile, built by Raytheon Technologies, was released from an aircraft seconds before its Northrop Grumman scramjet (supersonic combustion ramjet) engine kicked on. The engine compressed incoming air mixed with its hydrocarbon fuel and began igniting that fast-moving airflow mixture, propelling the cruiser at a speed greater than Mach 5 (five times the speed of sound),” the DARPA press release continued.

"The HAWC free-flight test was a successful demonstration of the capabilities that will make hypersonic cruise missiles a highly effective tool for our warfighters,” said Andrew "Tippy" Knoedler, HAWC program manager in DARPA's Tactical Technology Office. "This brings us one step closer to transitioning HAWC to a program of record that offers next-generation capability to the U.S military." The mission marked the first successful test of this class of cruise missile since 2013, according to the Pentagon.

Hypersonic missiles travel at over five times the speed of sound, or just over 6,100 kilometers per hour, and are capable of maneuvering en route to their destination. Their sheer speed and unpredictable flight path make these weapons more difficult to detect and target than their subsonic counterparts, offering unparalleled strike potential against high-value, time-critical, or heavily defended targets.

"The DoD (Department of Defense) has identified hypersonic weapons and counter-hypersonic capabilities as the highest technical priorities for our nation's security," Wes Kremer, president of Raytheon's Missiles & Defense business unit, told Reuters. HAWC is one of several hypersonic weapons projects being pursued by the Defense Department. The most mature of these efforts, the AGM-183 Air-Launched Rapid Response Weapon (ARRW), is expected to reach initial operating capability (IOC) by 2022 despite recent setbacks stemming from two failed flight tests.  The Air Force is also developing the mysterious Hypersonic Attack Cruise Missile (HACM), while the Navy is forging ahead with the hypersonic Conventional Prompt Strike (CPS) program.

Top experts and military officials have warned that growing Chinese and Russian capabilities in the realm of hypersonic weapons systems pose a significant threat to the power projection potential of the U.S. military. The U.S. does not “have systems which can hold [China and Russia] at risk in a corresponding manner, and we don’t have defenses against [their] systems,” said Under Secretary of Defense for Research and Engineering Michael Griffin during an earlier testimony to Congress. U.S. Air Force General John E. Hyten, the Commander of US Strategic Command told Congress in 2018 that “we [the U.S. military] don’t have any defense that could deny the employment of such a weapon against us.”