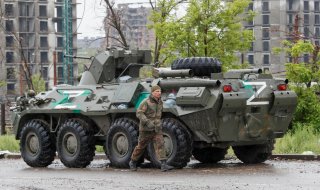 Vitali Gura, the deputy chairman of the Russian-installed “civil-military administration” within the Kakhovka district of Kherson—the capital of Ukraine’s eponymous province, and the only provincial capital captured by the Russian military in the first five months of its invasion—was killed on Saturday after he was shot multiple times at his home, according to Russia’s state-run TASS media network.

Kherson vice-president Ekaterina Gubareva announced Gura’s death on her Telegram channel, claiming that he had “died from the severity of his injuries” after suffering “multiple bullet wounds.” She indicated that Gura had led the administration’s housing and utility sector prior to his death.

The Russian civil-military administration has governed Kherson since April, roughly one month after Russian forces captured the city after a short battle. Although the city fell within a week of the Russian invasion, Ukrainian resistance to the Russian presence has remained widespread, and TASS acknowledged in its announcement of Gura’s death that a “high level of terrorist threat” had continued throughout the occupation.

“Subversive and reconnaissance groups operating on orders from Ukraine are attempting to destabilize the situation [in Kherson],” the Russian network wrote. “Earlier, a series of assassination attempts on civil-military administration officials by the Kiev regime has ripped through the Kherson region.”

In addition to establishing the civil-military administration, Russia has attempted to strengthen the region’s ties with Moscow and distance it from the Ukrainian central government in Kyiv. Pro-Russian authorities in the city have begun to issue Russian driver’s licenses and Russian license plates, and the country’s State Duma passed a law in mid-July allowing all Ukrainians to apply for expedited Russian citizenship without needing to demonstrate Russian-language proficiency or financial independence. The Russian-installed government in Kherson has also suggested that it would formally declare independence from Kyiv, and Russian foreign minister Sergey Lavrov claimed in an interview with Russia’s state-run RIA Novosti network that the Kremlin’s war aims had expanded to ensuring that the region could remain separate from Kyiv. U.S. and Western officials have warned that Russia might eventually attempt to annex Kherson, creating a land bridge between mainland Russia and the Russian-annexed Crimean Peninsula.

Ukrainian leaders, including President Volodymyr Zelensky, have vowed that the conflict will not end until all Russian-occupied territories, including Kherson, are retaken by Ukraine. In recent weeks, Kyiv has launched a counteroffensive toward Kherson, leading Russian forces to reinforce it with troops and equipment taken from their positions in the eastern Donbass region.