PETA is Right: China's Wet Markets Could Cause a Deadlier Coronaivrus 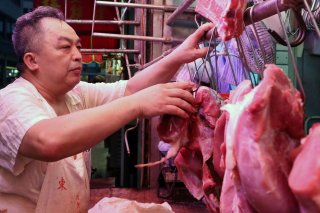 People for the Ethical Treatment of Animals are one of many animal rights activists that are demanding China end so-called wet markets before they create an even deadlier coronavirus strain.

These markets where live and dead exotic animals are often sold side-by-side in squalid conditions are getting scrutinized more closely as experts determine the novel coronavirus, COVID-19, likely originated from one in Wuhan, China. PETA is taking aim at people who support these markets.

“These markets are putting the world at risk. To suggest that in their present form that they are anything but dangerous is really reckless,” Ashley Byrne, associate director of campaigns for PETA, told the Daily Caller News Foundation. She was referring to people who defend such markets.

Byne also said that market vendors often steal people’s pets out of the backyards and sell them in the market.

Byrne’s group revealed new video footage Wednesday that PETA says was shot in Indonesia where wet markets exist. The video (warning: graphic content), purported to be at the country’s Tomohon market, appears to show dead dogs that were boiled alive alongside caged cats.

Wet market supporters say such forms of food trade are culturally important and provide fresh food for people in China.

Americans and the media should “put the outrage on pause,” Bloomberg Opinion columnist David Fickling suggested in an April 3 editorial addressing what he believes are some of the benefits of wet markets. He has not responded to the DCNF’s request for comment.

Fickling believes these markets are important for one pivotal reason: “[C]onsumers regard them as a healthier and more sustainable alternative.” Others have expressed similar sentiments, with some saying wet markets should be preserved for cultural reasons.

Virus outbreak has had a “decidedly dehumanizing effect, reigniting old strains of racism and xenophobia that frame Chinese people as uncivilized” with an appetite for “dogs, cats, and other animals outside the norms of Occidental diets,” Zhang wrote in a Jan. 31 column.

Health experts believe the coronavirus, or COVID-19, originated in Wuhan, China before traveling across the globe and landing in the United States, where it has killed more than 14,000 people. The likely source was the Huanan Market in Wuhan — roughly 27 of the first 49 patients visited the market.

Wild and exotic animals are mixed with domesticated species in an environment that weakens the animals’ immune systems, leading to a mix of genetic code that can spread from one species to another, according to biologist Kevin Olival, vice president for research at the EcoHealth Alliance.

“This is where you get new and emerging diseases that the human population has never seen before,” Olival told The New York Times in a Jan. 25 report on Wuhan’s markets. Byrne, PETA’s representative, believes the markets are “ticking time bombs,” putting the world at risk even after COVID-19 continues ransacking populations.

PETA wants the World Health Organization (WHO) to pressure China into shutting down the market.

“The WHO is the agency that the entire world is looking to for guidance on this. Its recommendations are taken seriously. It’s reprehensible that they have not recommended that all wet markets be taken down,” Byrne told the DCNF.

“If we’re to prevent future pandemics, we must heed the warning of top coronavirus researchers like Dr. Danielle Anderson, scientific director of the Duke-NUS Medical School, and cut them off at the source,” Newkirk wrote in a memo to Tedros, who won his post in 2017 with China’s backing.

Tedros, for his part, has effusively praised China for what he considers a transparent response to the coronavirus, or COVID-19, which has killed more than 30,000 people worldwide and caused governments to send economies to a screeching halt. Chinese officials told WHO in mid-January that the virus was not transmittable from animals to humans.

International Fund for Animal Welfare (IFAW), for one, wants legislatures throughout Asian countries to ban wet markets, which are highly lucrative in China.

“The repeated outbreaks of zoonotic diseases (Ebola, HIV/aids, SARS, COVID-19) demonstrate that controlling wildlife trade is no longer just a conservation and animal welfare issue. It is an animal and public health issue, a biosafety issue and a national security issue,” Grace Ge Gabriel, IFAW’s Regional Director Asia, said in a statement to the DCNF in March.

Meanwhile, a bipartisan group of U.S. lawmakers is calling for an immediate ban on live wildlife markets.

Democratic New Jersey Sen. Cory Booker and his Republican colleague, South Carolina Sen. Lindsey Graham, as well as Republican Rep. Michael McCaul of Texas, were among a handful of lawmakers asking the WHO to end the markets.

“It is clear that to protect human health, these close and sustained interactions with wildlife must stop,” they wrote, noting that research links wet markets where humans interact with live and dead animals as a place where zoonotic diseases fester before making their grand entrance on the global scene.