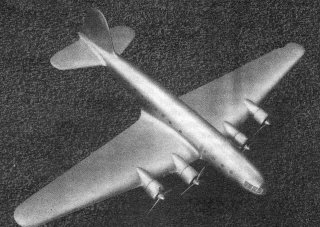 During World War II, the Royal Air Force and the United States Army Air Corps literally were equipped with thousands of bombers. The British built more than 7,300 Avro Lancaster bombers, while the United States cranked out more than 8,680 B-17 Flying Fortresses and more than 18,000 B-24 Liberators were produced during the war.

The Soviet Union meanwhile may have produced a lot of tanks and more bolt action rifles than any other combatant nation, yet it managed to produce only ninety-three of its Petlyakov Pe-8 heavy bombers. However, to say that the Soviets put those four-engine heavy bombers to good use is a vast understatement.

Almost immediately after the German invasion in June 1941, the Soviet bombers were used in “morale raids” against Germany and that included a bombing campaign over Berlin that began on August 8, 1941, and extended into early September. A year later a Pe-8 was also used to transport Foreign Minister Vyacheslav Molotov from Moscow to the United States.

There were a number of factors in play as to why the Soviets didn’t produce more bombers The biggest reason was that tanks were far more important in defending Mother Russia, but another reason predated the war.

Prior to the German invasion, the Soviets saw little need for a heavy bomber, but yet development of the Petlyakov Pe-8 had begun in the early 1930s when the Soviet Air Force began to seek a replacement for the antiquated Tupolev TB-3 series of bombers that had been in service for more than a decade.

The Air Force called for a more modern bomber, even though Moscow saw little possibility in using such a weapon to spread the communist ideology to the west. Among the requirements of the Soviet Air Force was that the bomber could carry 2,000 kilograms or roughly 4,400 pounds of bombs over a distance of 2,800 miles and at speeds greater than 270 miles per hour. That more than doubled the range and speed of the TB-3.

The task of developing the bomber was assigned to the Tupolev Design Bureau, which was headed by noted aviation pioneer Andrei Tupolev—who went on to develop such bombers as the Tu-95 “Bear”—and work was overseen by Vladimir Petlyakov.

The initial prototype, designated TB-7, was powered by four M-105 engines, which each produced 1,110 horsepower and supercharged by a larger blower driven by a single M-100 engine in the rear fuselage. However, the production version was eventually fitted with four Mikulin AM-35As engines, but some thought was also given fitting the aircraft with Mikulin M-30B diesel-fueled engines. Those never supplied the required performance results though.

The aircraft was re-designated the Pe-8 in 1940, and when Petlyakov was killed in a plane crash in 1940 it was further named in honor of him.

The Pe-8 in Wartime

After the outbreak of the war, the Pe-8 was used against German factories, airfields and rail yards. As a result, the Soviet bomber became a prime target for the German Luftwaffe; however, the Pe-8 was an aircraft that was able to hold its own. It featured two 7.62-millimeter ShKAS machine guns in the nose turret, two 12.7-millimeter Berezin UBT machine gun in the engine nacelles and ShVAK 20-millimeter cannons in the dorsal turret and tail turret. It was reported that the best way to take on the bomber was to fly at it head-on and from above as the frontal coverage is poor and aircraft coming from high altitude could avoid almost all defensive firepower.

While it was a large bomber that could carry a massive load of bombs, it was large, slow and had a poor rate of climb. Moreover, it was a true Soviet design and was prone to devastating fires and it wasn’t known for its accuracy.

As losses of the Petlyakov Pe-8 mounted in 1944 it was largely removed from service—especially as other lend-lease bombers were made available. However, it remained in use as a transport aircraft and after the war, the Pe-8 served as a technology testbed for non-military roles.

Today not a single Pe-8 is believed to have survived and while it certainly didn’t have the impact on the war effort that the B-24, B-17 or Lancaster had—the Petlyakov served the Soviets well when they needed it the most.