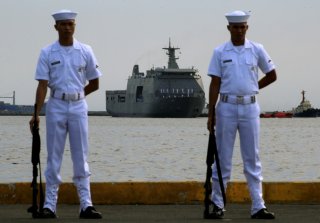 The United States may not be the only power to utterly and completely disregard Beijing's claims to the near entirety of the South China Sea. Just last month, China announced that it would demand that all "foreign ships" report their course, call signs, and cargo before entering what Beijing has said are its territorial waters.

China has laid claim to almost all of the 1.3 million square miles of waters as sovereign territory, but the United States Navy's response has been business as usual, and multiple vessels have sailed through the contested waterways in support of freedom of navigation.

The U.S. Navy won't have to go it alone of course, and last month, the Royal Navy's flagship aircraft carrier HMS Queen Elizabeth also conducted operations in the waters. And now this week, the Philippines made it clear they wouldn't abide by China's demands.

"Our stand on that is we do not honor those laws by the Chinese within the West Philippine Sea because we consider that we have the sovereign right within this waters," Philippine Defence Secretary Delfin Lorenzana said during an event marking the Philippines' Mutual Defense Treaty (MDT) with the United States, Aljazeera reported. "So we will not recognize this law of the Chinese."

Manila has already protested what it has called an "illegal" and even "threatening" presence of hundreds of Chinese "maritime militia" vessels with its EEZ. The vessels, which have been emboldened by Beijing's declaration that they can operate as a paramilitary force in support of Chinese interests, have sailed with the Philippine EEZ on several occasions this year.

In one incident, Manila was accused of dumping sewage and other wastewater from the boats in the waters.

"We are confirming and verifying these wastes being dumped," Lorenzana said via a statement in July when the reports of the illegal dumping were first made public. "We consider such irresponsible acts, if true, to be gravely detrimental to the marine ecology in the area. Despite conflicting claims and interest by states in the South China Sea, all nations must be responsible stewards of our natural resources and environment.”

China is not the only nation to lay claim to the waters of the South China Sea, and several Southeast Asian countries, including the Philippines, Malaysia, Brunei, Indonesia, and Taiwan have also laid claims to the resource-rich waters.

Beijing's new regulation is part of China's Maritime Traffic Safety Law, which went into effect on September 1. China claims it is to better ensure the safe passage of vessels carrying radioactive materials, bulk oils, chemicals, and a host of other supplies. Vessels are required to report the name, call sign, current position, next port of call, and even estimated time of arrival to Chinese authorities.

However, a 2016 ruling at The Hague said that Beijing's claim over the waters has no legal basis. However, China has largely ignored the decision and has instead continued to expand its presence. That has included the building of artificial islands that include runways for combat aircraft and docks for military vessels.

While Manila has made it clear that it won't abide by China's demands over the passage of vessels in the contested waters, the Philippines have also called for a comprehensive review of Manila’s alliance with the United States, saying the Philippines is getting less from its relationship with Washington than even non-treaty allies, Aljazeera also reported.

"Some questions being asked in Manila are, do we still need the MDT; should we amend it," he told Washington's Center for Strategic and International Studies on Wednesday, referring to the 1951 pact. "What is clear is that we need a comprehensive review of our alliance."

Allies and partnerships are what may be needed most to stand up to Beijing and ensure safe and free passage for all vessels in the South China Sea.