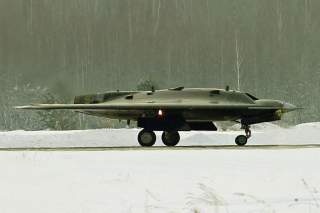 The first blurry images of the Hunter-B drone appeared on Jan. 23, 2019 on a Russian aviation website. Those photos depict, from behind and in front, a tractor towing the unmanned aerial vehicle along a snow-ringed runway at an airfield in Novosibirsk in southern Russia.

A new photo, showing the Hunter-B from the side, appeared on social media in early February. In that new pic, the Hunter-B is either parked on a runway or taxiing under its own power.

Broadly speaking, Hunter-B is a flying wing that's similar in shape to the U.S. Air Force's B-2 stealth bomber. But aside from its lack of vertical control surfaces, the Russian UAV is non-stealthy.

For one, it appears that the Hunter-B's nose-mounted inlet directly exposes the face of the drone's engine. That could produce a huge blip on any radar viewing the Hunter-B from head-on. "Most of the [radar-cross section] contribution for the nose region will result from the engine inlet," John Kelly, a Boeing engineer, explained in a 1975 study.

Designers for years have struggled to reduce UAVs' frontal RCS. Northrop Grumman described its X-47B carrier-drone demonstrator as "low-observable relevant" rather than "low-observable," apparently owing in part to the type’s straight inlet.

Northrop managers told reporters that, if the U.S. Navy were to select the X-47B for development into a front-line warplane, the company might modify the design for greater stealth. Perhaps not coincidentally, the X-47B and Hunter-B share strikingly similar nose profiles.

As it turned out, in 2018 the U.S. Navy tapped Boeing with its MQ-25 design to build the fleet's first carrier-launched UAV. The MQ-25 will enter service as an aerial refueling tanker, but also could evolve to perform other roles such as surveillance and strike.

Boeing took pains to include key stealth features in the MQ-25's design. In contrast to the Hunter-B with its nose inlet, the MQ-25's inlet is on its dorsal spine -- a feature Boeing apparently borrowed from Northrop's 1980s-vintage Tacit Blue stealth demonstrator.

Indeed, Tacit Blue and Boeing's MQ-25 are similar in several regards, Aviation Week reporter Graham Warwick pointed out. "On Tacit Blue the engines exhausted from a slot nozzle located between V-tails -- which also seems to be the case with Boeing’s MQ-25," Warwick wrote.

A wide, short slot nozzle helps to mask a drone's engine from sensors viewing the vehicle from below, behind and the sides. Even the modestly-stealthy X-47B has a slot-like nozzle.

On Hunter-B, by contrast, the engine juts out of the back of the airframe for a span of several feet, which is "about as bad as it gets when it comes to reducing the infrared and radar signatures of the aircraft," The War Zone reporter Tyler Rogoway wrote.

Hunter-B is not very stealthy. But that doesn't mean the Russian air force won't deploy the drone in large numbers in the near future. Russia's experience in Syria underscored the need for armed drones, Samuel Bendett, an expert on the Russian military, told reporter Kelsey Atherton.

"Going into Syria in 2015, Russia was lacking a key combat element — the ability to hit targets quickly following their identification, one of the key functions of [unmanned combat air vehicles] around the world today."

Weighing 20 tons and capable of speeds up to 620 miles per hour, Hunter-B likely will be the "heaviest and fastest UAV [in Russian service] if and when fielded," Bendett said. The developers reportedly plan to fly the drone for the first time this year.

Hunter-B could give the Russian air force the ability to quickly strike pop-up targets. It just probably won’t be capable of sneaking past enemy air defenses in order to do so.

The War over UCLASS (And Future of Naval Power Projection) Continues