This Photo Is Proof Why China, North Korea and Russia Fear the F-35 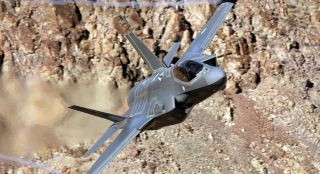 In May 2016, the F-35 landed on Dutch soil for the first time, fulfilling a promise Dutch defence minister Jeanine Hennis-Passchaert made the previous year to show the nation the new fifth-gen fighter.

Taken at an undisclosed location in the U.S. in December 2017 by photographer Dafydd Philips, the following cool video is a photoshoot arranged by Royal Netherlands Air Force (RNLAF) to promote the F-35A Lightning II, the service fifth-gen fighter aircraft.

As one of the original nine partner nations for the F-35, and the second international partner to receive the F-35, the Netherlands continues to be a key contributor to the development, production and sustainment of the F-35 program.

The Dutch Parliament approved an order for eight Lockheed Martin F-35As in March 2015, confirming the aircraft as the official replacement for the F-16 for the RNLAF. This lot of eight F-35s will be delivered in 2019. The current program of record for the Netherlands is for up to 37 aircraft.

In May 2016, the F-35 landed on Dutch soil for the first time, fulfilling a promise Dutch defence minister Jeanine Hennis-Passchaert made the previous year to show the nation the new fifth-gen fighter. While in the Netherlands, the F-35 performed several “experience flights” to allow the Dutch public to evaluate the difference between the F-35 and legacy fighters, the F-16, noise levels. According to Lockheed Martin the test results showed negligible differences between the two jets’ noise levels.