This Picture Is Your Clue: A New Kind of Satellite-Killer Emerges in Russia 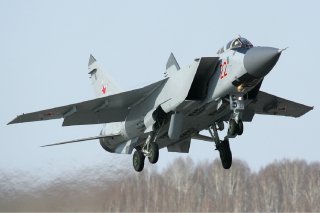 Russia appears to be working on a new kind of anti-satellite weapon. One that combines tiny, weaponized satellites, a small rocket booster and a MiG-31 interceptor doubling as the overall system’s first stage.

That’s the startling assessment from Bart Hendrickx, who The Space Review described as a “long-time observer of the Russian space program.”

Hendrickx in late April 2020 penned a long analysis in The Space Review, piecing together fragmentary evidence including photographs, government contracts and testing activity.

His conclusion is that Russia is developing an anti-satellite system under the project name Burevestnik. Unlike most other ASAT systems, Burevestnik doesn’t rely on an explosive or kinetic-energy warhead actually to destroy its orbital target.

Instead, the weapon deploys predatory micro-satellites that would maneuver toward their targets in low-Earth orbit and disable them.

Hendrickx’s evidence is compelling. It begins with a photo that circulated in September 2018. “An aircraft photographer noticed something interesting while observing activity at the Gromov Flight Research Institute in Zhukovsky near Moscow,” Hendrickx wrote.

“What caught his attention was a MiG-31BM fighter jet with a large black missile suspended under its belly. While this specific aircraft had been seen before, the rocket was new. The pictures he posted on the internet baffled observers: it seemed to be too big to be an air-to-air or an air-to-surface missile. It did appear to be the right size for an anti-satellite weapon.”

Hendrickx scoured open-source records to track the various developmental efforts that could contribute to a new ASAT weapon. “These showed that the project began on Sept. 1, 2011, with a government contract awarded to the Design Bureau of Machine Building, a weapon manufacturer based in Kolomna (about 100 kilometers southeast of Moscow) that seems to be the overall coordinator of the project.”

A May 2019 PowerPoint presentation from PAO Saturn, a Russian solar-panel and battery manufacturer, identified two different satellites that could be part of the wider Burevestnik effort. The satellites presumably are potential payloads for the rocket that appeared on the MiG-31 the previous year.

Perhaps most compellingly, Russia since 2013 has been conducting on-orbit tests of so-called “inspection satellites” that can maneuver close to other spacecraft, ostensibly in order to inspect them for damage. With no major modification, inspection satellites could function as weapons. Disabling enemy spacecraft instead of inspecting friendly ones.

“Analysis of publicly accessible online Russian sources now leaves little doubt that the MiG-31BM and the rocket are part of a broader ASAT project,” Hendrickx concluded.

The PL-19 Nudol is a so-called “direct-ascent anti-satellite” weapon. Direct-ascent weapons arguably are the least sophisticated anti-satellite weapons. Essentially just medium-weight rockets, like the kind space agencies use to boost small payloads into low-Earth orbit, DA-ASATs are cheap to develop and easy to use but only can threaten low-flying spacecraft.