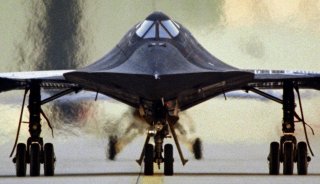 The SR-71 Blackbird, one of the most famous military planes in U.S. history, had a more than thirty-year life, although the number of men who flew it in the time is limited. One of those men, Air Force pilot Brian Shul, has emerged as one of the leading chroniclers of the SR-71 experience.

Shul flew more than two hundred combat missions in his career and was shot down near the end of the war. Despite burns, he survived, and resumed his flying career, flying the Blackbird after Vietnam. He went on to write five books, two of which were specifically about his time as a Blackbird pilot, and is also an accomplished photographer.

Shul also tells a story about the SR-71 that’s become legendary. It involved a training mission around the Western United States, and a ground speed check with an F/A-18 Hornet.

The pilot gave an interview to New Atlas, back in 2016, about his survival of the crash, and his other experiences flying, both in Vietnam and in the Blackbird.

“I was just a regular airforce pilot,” he said during the interview. “I was flying special ops during the end of the Vietnam war down near Cambodia. I got shot down, I was forced to ride an airplane down into the jungle. Blew up, was given up for dead. The helmet helped save me when I was stuck in that burning cockpit—I had a helmet and visor, but my visor started to melt. If I'd been in there a few more seconds it would've melted into me and I would've lost my eyes.”

Shul credited Special Forces with rescuing him, after which he was Medevac’d to Okinawa. Eventually, he was shipped back to the United States, to the main burns center at Fort Sam in Houston. He eventually passed a flight physical and was able to resume his flying career.

“So I went back, I flew the A10, A7, F5, and then I applied to fly the SR-71,” he said in the interview. “By then everyone said, ‘OK, he’s a big story, but now you’ve gotta pass an astronaut physical to get in a spacesuit to fly that thing,’” he added, referring to the Blackbird.

“I ended up flying the Blackbird for four years, I carried a camera—photography was my big passion—and I ended up with the world's rarest collection of Blackbird photos. The airplane still holds every speed and altitude record,” he said. “You did six months in the simulators, six months before they'd let you fly the airplane. So you're very prepared. Technically speaking, nothing is surprising you. Except, nothing can prepare you for the acceleration and everything happening at once.”