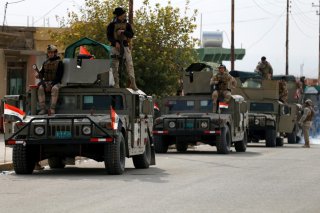 A sequence of cross-country attacks perpetrated by various groups indicate Iraqi’s Security Forces are being pulled in too many directions.

Over the span of one week, Turkish forces began a fresh offensive targeting Iraqi Kurdistan in northern Iraq, U.S. assets were bombarded with rocket attacks for the thirtieth time since January in Bagdad, and eighteen Iraqi military personnel were killed by ISIS fighters in various agricultural suburbs in the country. While the Iraqi government has focused on balancing U.S.-Iranian tensions, Ankara and ISIS sleeper cells have taken advantage of perceived gaps in the country’s security apparatus. In order to counter the resurgence of extremist activity, the Iraqi Security Forces must be reworked to exclude the Iranian-backed Shiite paramilitary groups.

Following the departure of U.S. troops from Iraq in 2004, Iraq essentially had to completely dismantle and then restructure its security force network from top to bottom. In 2014 ISIS achieved major territorial gains in Iraq which forced the army to rebuild again, this time relying heavily on foreign intervention and training. Over 250,000 local troops were trained or mentored by the U.S.-led coalition that entered the conflict to aid in the fight against ISIS. The Iranian-backed Popular Mobilization Forces (PMF) also entered the conflict at this time, initially supporting the multi-coalition effort to defeat the Islamic State. By 2019, PMF militias were officially integrated into the Iraqi Security Forces.

Once ISIS was believed to be largely defeated in Iraq, the PMF militias adopted a new purpose.  By infiltrating all aspects of Iraqi political, economic, and military spheres, these Shiite militias were well equipped to export Tehran’s clout throughout the country. The PMF currently function within the Iraqi Security Forces under law, although their motives and actions aim to satisfy the interests of Iran.

The PMF’s disregard for Iraq’s sovereignty has been demonstrated amid rising U.S.-Iranian tensions in recent months. Following the U.S.-ordered targeted killing of Iranian Gen. Qassem Soleimani in January 2020, Iraq has become a battleground for U.S.-Iranian tensions. Iranian-backed militias have repeatedly targeted U.S. assets and diplomatic sites in Baghdad’s fortified Green Zone with rocket and drone assaults for nearly a year. In response, the United States has pressured the Iraqi government to punish those responsible for the attacks.

As Iraqi Prime Minister Mustafa al-Kadhimi has focused on balancing Iraqi relations with the United States and Iran, Turkey has launched major land and air offensives in the country’s northern region. In August 2020, Ankara’s “Operation Claw Tiger” operation killed two high-ranking Iraqi security officials, drawing harsh criticism from the Iraqi military and government. Turkey’s most recent “Claw-Lightening and Claw-Thunderbolt” campaign in April 2021 also complicates Iraqi-Turkish relations although no Iraqi Security Force members were killed. Kadhimi’s election campaign revolved around the pledge that Iraq would no longer be a battlefield for outside entities. However, the uptick in Ankara’s offensives in Iraq suggest Turkish President Recep Erdogan does not consider this vow a serious possibility as the prime minister grapples with various threats.

Within the span of a week, Kadhimi was pressured to address Turkish assaults on Iraqi territory in addition to continued Iranian-backed rocket attacks in Baghdad. The perceived lack of control the prime minister has over Iraq’s security has likely emboldened the resurgence of ISIS attacks, which recently led to increased security measures after eighteen members of Iraq’s Security Forces were killed. Although Iraq declared victory over ISIS in 2017, sleeper cells remain active across the country. The timing of these attacks suggest that operating extremist cells exploited the already volatile condition of Iraq’s security apparatus.

The ability of state and non-state actors to carry out cross-country attacks in Iraq undermines the country’s sovereignty while highlighting the Iraqi Security Forces’ dysfunction. Prime Minister Kadhimi’s resistance to rebuilding Iraq’s security forces from the ground up for the third time in two decades is understandable. However, without a complete shake-up, foreign interference in Iraq will remain unpreventable.