This Plane Is How Britain Will Hunt Russian Submarines 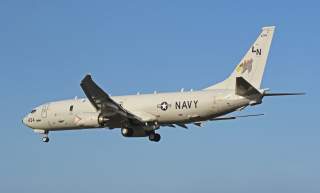 Maritime patrol aircraft (MPA) are an oft-forgotten part of naval deterrence. While not as eye-catching as fast attack aircraft and ships, MPA are the “eyes” of a navy in many ways, keeping a lookout for surface and subsurface threats in a wide area. However, the British military has been without a MPA since 2011, when the Hawker Siddeley/BAe Systems Nimrod was retired. But with the arrival of new P-8A Poseidon aircraft in February 2020, the Royal Air Force has just reacquired this capability. The Royal Air Force officially took delivery of the Poseidon in November 2019 but at the time the aircraft remained in the United States for British crews to train on.

The ten-year gap in MPA coverage for the UK has been a sore spot for those who believe in strong British defense. Operating MPA and “sub hunting” was a large Cold War responsibility of the British military (shared between the Royal Air Force which operated the MPA and the Royal Navy which operated the ships), as the Greenland, Iceland, UK (GIUK) Gap was considered to be a critical naval chokepoint, which was constantly patrolled and defended. While there was a program in place to upgrade the aging Nimrods around 2012, the program was cut at the time due to shrinking defense budgets. However, the increase in Russian subsurface activity has brought about a need to bring back the MPA.

Russian subsurface activity in the waters around the UK threatens the UK’s strategic stability because the UK relies on a rotating series of nuclear-armed submarines that patrol near the UK as a nuclear deterrent. If Russian submarines are entering UK waters and trailing those submarines, then they could sink them before they are able to launch their missiles. As these submarines are the UK’s only remaining nuclear delivery platform, any threat to them is a threat to the UK’s strategic nuclear stability.

As for the aircraft itself, the P-8A is considered to be one of the best maritime patrol aircraft in the world. It derives reliability from its parent airframe, the Boeing 737NG. It also has the option to carry a loadout of 129 sonobuoys or use the as anti-ship and anti-surface missiles under the wings and torpedos in an internal bay. This flexibility is critical for smaller air forces as planes can be tasked to both search and strike. But for the Royal Air Force, whose Eurofighter Typhoons lack anti-shipping capability, this capability is critical as it would also restore their ability to perform airborne anti-shipping strikes.

The multirole nature has made Poseidons very popular with Asian-Pacific militaries, with the Indian, New Zealand, Australian, and South Korean militaries all operating or planning to operate Poseidons. Norway also plans to buy P-8s with deliveries around 2022 and 2023, which will further enhance the maritime patrol and sub hunting capabilities of NATO in the North Sea.

The UK plans to eventually receive nine Poseidons, with deliveries concluding in 2021 and full operational capability reached by 2024. These deliveries may mark a resurgence in British naval power around the mid 2020s, as the Queen Elizabeth II aircraft carriers are also gaining in capability and should be fully stocked by then and the new Type 26 frigates are expected to enter service in that period.