This Plane Is a North Korean Submarines Worst Nightmare 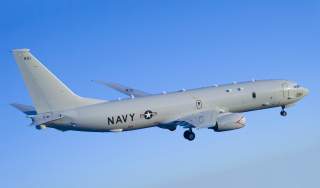 The Defense Security Cooperation Agency, the State Department branch that approves arms sales, cleared the $2.1 billion purchase of six P-8A aircraft. The sale will still have to be approved by Congress, though rejection is unlikely.

The DSCA announcement included a laundry list of accessories packaged into the sale, including radio and navigation systems, missile warning sensors, electronic warfare gear and the customary array of training and support services.

"The ROK [Republic of Korea] is one of the closest allies in the INDOPACOM [Indo-Pacific Command] Theater," DSCA said. "The proposed sale will support U.S. foreign policy and national security objectives by enhancing Korea’s naval capabilities to provide national defense and significantly contribute to coalition operations."

Interestingly, DSCA concluded that because South Korea has long experience operating the P-3 Orion patrol aircraft, it should have no problem flying the P-8A. "The ROK procured and has operated U.S.-produced P-3 Maritime Surveillance Aircraft (MSA) for over 25 years, providing interoperability and critical capabilities to coalition maritime operations," DSCA said. "The ROK has maintained a close MSA acquisition and sustainment relationship with the U.S. Navy over that period. The proposed sale will allow the ROK to modernize and sustain its MSA capability for the next 30 years. As a long-time P-3 operator, the ROK will have no difficulty transitioning its MSA force to P-8A."

Either way, this is not good news for North Korea, which has a huge fleet of about 70 submarines, a mixture of attack, short-range coastal, and midget submarines. These subs are old Cold War Soviet models, but even old diesel-powered can be hard to detect and can torpedo an unwary American or South Korean ship. The P-8A is faster and flies higher than the P-3, and carries a variety of modern sensors as well as sensor fusion capabilities that link to other ships and aircraft as well as drones. The Poseidon can detect a submarine periscope from high altitude, and then sink the target with torpedoes and depth charges. The Poseidon can also carry Harpoon missiles to attack surface ships.

South Korean P-8As also aren't good news for China, which could potentially come to blows with South Korea in various scenarios such as a U.S.-China conflict, or if the North Korean regime collapses.