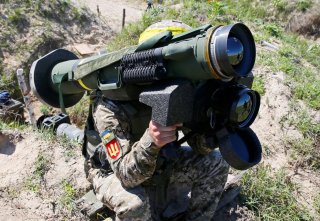 Javelin anti-tank weapons have been incinerating and destroying Russian tanks and armored vehicles for months now with great effect. This tactical reality is one of the key reasons why Ukrainian defenders were able to stop a much larger mechanized Russian force trying to capture Kyiv. Therefore, it should come as no surprise that the Pentagon’s latest military aid package to Ukraine includes 1,000 new Javelins.

A senior Pentagon official noted that Javelins were extremely effective during the opening days of the war. Anti-armor weapons, and their effective use against heavy advancing armored vehicles, are emerging as a defining element in the Russo-Ukrainian War.

The Javelin’s on-the-move targeting ability has allowed Ukrainian fighters to maneuver into attack positions against advancing Russian vehicles before dispersing to avoid counterattack. These kinds of tactics can use terrain, buildings or key intersections, bridges, and chokepoints for quick hit-and-run missions.

Certainly, small arms fire alone would not be able to destroy a small column of advancing armored vehicles. However, narrow areas Russian vehicles have to transit through, such as between buildings, would leave them vulnerable to Ukrainian Javelin attacks or destruction from other kinds of air-and-ground-based anti-tank weapons.

This tactical use of anti-armor weapons played a pivotal role in stopping Russia’s attempted attack on Kyiv. As Russian forces tried to close in on urban areas, including buildings and narrow streets, dismounted Ukrainian units armed with Javelins attacked Russian armored vehicles from hidden locations.

The Javelin can be operated as a shoulder-fired weapon by small groups of soldiers on the move or as a mounted system fired from tactical vehicles. Any weapon fired from a  higher altitude can likewise exploit a tactical advantage.

The U.S. Army’s ongoing upgrades to the Javelin anti-tank missile offer an interesting point of reference, as a new Raytheon-built Lightweight Command Launch Unit for the weapon doubles the attack range.

More recent innovations, slated to enter production in 2022, also incorporate improved sensor fidelity and a “fast lock” for improving attacks on the move. U.S. Army officials previously told The National Interest last year that the service is also engineering a new warhead for the Javelin as well.