Poland Affirms It Will Help Refugees if Russia Invades Ukraine 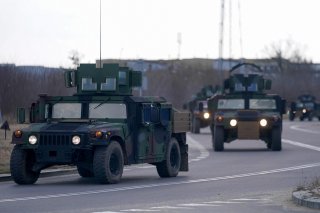 A Russian invasion of Ukraine could place thousands of Russian troops within striking range of Poland.

“We are ready,” Blaszcak said through an interpreter. “We are ready to help all those who will be forced to leave Ukraine. We, as a nation that has so strongly and badly experienced World War II, we know what support is all about, and we are ready, of course, to support all those who need the support and who suffer because of such an aggression.”

The relationship between the United States and Poland is indeed strong. The United States has more than 4,000 rotational troops in the country, the fourth-largest concentration of U.S. forces in Europe. Other American troops have arrived recently to bolster the American presence if needed.

“In light of Russian force buildup near Ukraine, we appreciate Poland for hosting an additional 4,700 U.S. soldiers who are prepared to respond to a range of contingency, and they will work closely with our State Department and with Polish authorities, should there be any need to help American citizens leave Ukraine,” Austin said.

Poland has also acquired the F-35 Lightning II fighters and operates American-built Patriot missiles. Austin also announced at the press conference that Poland would have the opportunity to purchase two hundred and fifty new M1A2 Abrams tanks in the coming years. Austin said the partnership has only grown stronger since the 2020 Enhanced Defense Cooperation Agreement between the two countries.

Austin said he had no further information about additional U.S. troop deployments to the region, but said he remains in contact with allied nations to continue discussions.

“We highly appreciate the U.S. presence in Poland, and at the same time, we do believe that this is the biggest and the most important deterrent factor for a potential aggressor -- appreciate the possibility to cooperate between the Polish armed force and the U.S. Armed Forces because this is all about building interoperability,” Blaszcak said.