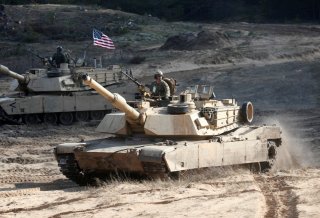 The U.S. Army is sending 250 Abrams tanks to Poland through a $1.148 billion Foreign Military Sales order designed to strengthen NATO’s eastern flank against further Russian aggression. This mechanized ground counter-attack force will be within reachable striking distance of the Russian border.

Polish minister of defense Mariusz Blaszczak made clear last year that this acquisition was a national security priority for Poland: “...of course this is a response to the challenges we face in terms of international security. Our task is to deter a potential aggressor. We all know where this aggressor is and what threats are possible. So it is a quick, decisive response to these threats…These are battle-tested tanks that have been designed as a counterweight to the most modern Russian T-14 Armata tanks.”

The Abrams’ addition to Poland’s arsenal is quite significant in a number of respects. The tank is large and lethal enough to impact the balance of power on the European continent, particularly given the longstanding concern among some strategists that areas of Eastern Europe, especially the Baltics, might not have a sufficient armored force presence to deter a Russian military advance.

Positioned to Ukraine’s west, Poland could reinforce Ukrainian defenses or signal resolve to help increase NATO’s deterrence posture. But the move to send Abrams tanks may be largely symbolic in some respect, as the Global Firepower military rankings say Russia operates as many as 12,000 tanks. However, the sheer volume of tanks matters less than the range and resolution of tank sensors and the precision of tank weapons. A numerically inferior tank forcer could prevail against superior numbers of tanks should they have precise, accurate, and long-range thermal sights and sensors. In that case, a small number of tanks could target and destroy a larger adversarial force at standoff ranges without being detected. This occurred during the 1991 Gulf War’s now famous tank battles, during which Abrams tanks destroyed large numbers of Iraqi T-72s.

As part of this equation, war planners must consider how many of Russia’s 12,000 tanks have been modernized such that they could rival or compete with the United States’ upgraded M1A2 Abrams tanks, which will be soon operating in Poland. How many Russian tanks are upgraded T-72 or T-90s, and what kind of range and resolution do their sensors have? Answering this question may well determine who prevails in a Polish-NATO-Russian tank battle. Beyond the advantage of bolstering deterrence efforts, getting Abrams tanks to Eastern Europe on a faster time frame makes a lot of sense for NATO’s overall strategic posture and forward footprint.

The firepower of the Abrams alone, and the upgraded attributes associated with the v3 variant, brings new dimensions of attack possibilities, operational flexibility, and long-range, high-resolution targeting.

The other element of this is how it demonstrates, not only within the U.S. Army but also throughout Europe, the belief that there simply is not any real substitute for the survivability, firepower, and protection provided by the Abrams tank when it comes to ground combat.