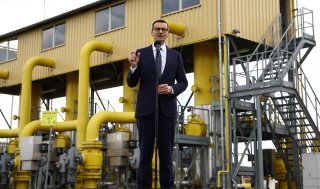 Polish Oil Mining and Gas Extraction (PGNiG), the state-owned Polish gas and oil company, publicly announced today that gas deliveries from Russia are being halted, although the company had fulfilled its own Jamal pipeline contract obligations. The move comes after Russian president Vladimir Putin issued decree No. 172—bluntly titled, “On the special procedure for the performance of obligations of foreign buyers to Russian natural gas suppliers.” According to this decree, so-called “unfriendly states” are to pay for Russian energy in Russian rubles—or, to be precise, open a bank account in the jurisdiction of the Russian Federation and settle dues in rubles there. PGNiG declined to meet this new requirement, as it was not included in the original Jamal contract, and announced it will consider demanding compensation from Russia as the latter broke contract clauses.

Gazprom’s decision cannot cause an energy crisis in Poland since the country followed diversification efforts for nearly a decade now. Gas reserves are 76 percent full (95 percent this past December)—one of the highest rates in the European Union, where the average storage is less than 32 percent. Considering the winter season (which requires internal heating) is about to finish, this gives the Polish government a clean bill until autumn this year.

In the meantime, the Baltic Pipe, a gas pipeline connecting Norway’s gas fields through Denmark to Poland, will be opened in October and is expected to become fully operative by January 2023. It has a projected capacity of 10 billion gas cubic meters—nearly half of the current yearly gas consumption in Poland. Around the same time, an interconnector with Slovakia will be opening, thereby making 5.7 billion cubic meters in capacity accessible to Poland (and 4.7 billion cubic meters the other way). Warsaw will also invest in the Floating Storage Regasification Unit in Gdańsk’s port. Just yesterday, the Open Season phase—a period of time when all parties are given equal consideration—successfully finished, proving that energy markets see the investment as economically necessary and viable. And in the shorter term, starting next month, a gas connection with Lithuania will go online, thereby allowing more gas to flow from the Klaipeda LNG terminal. This is in addition to Poland’s own LNG terminal in Świnoujście (with a 6.2 billion cubic meters capacity), which expanded earlier this year.

All this comes amid the Czech prime minister’s planned visit to Warsaw, due to occur on Friday. One of the main reasons for his visit will be to negotiate a number of details concerning the Stork II pipeline, designated to carry liquified natural gas (LNG) from a Polish terminal.

There are caveats though. With its own production standing at about 4 billion cubic meters, Warsaw must still continuously import gas—currently, from Germany. Ironically, it’s Russian gas, and Poland would probably pay more for this, as it’d be based on spot prices. It is this source of gas that observers will keep an eye on over the next few months, with profound implications for Polish energy security. If Germany were to reject Russia’s demand that energy supplies must be paid for in rubles, if Moscow were to correspondingly stop supplying Berlin—a rather far-fetched scenario, albeit not as far-fetched as over a month ago—then Poles should start worrying a little bit more. Come November, Warsaw would have to start considering alternative sources, and would probably look to… importing Russian gas from Hungary, delivered through the newly opened Slovakian-Polish interconnector. Given the friendly relationship between Putin and recently re-elected Hungarian prime minister Viktor Orbán, this source seems the most secure today. In any case, for Russia, denying German gas deliveries would be tantamount to a self-defeating act of war—Moscow needs energy revenues now more than ever.

For Warsaw, of more immediate concern is ensuring that upcoming projects for this year can be successfully brought online, which includes protecting them from any sort of hybrid attack by Russia. Likewise, the decision has destabilized gas prices, and will likely result in inflation in the short to medium term. Still, with all these risks in mind, one might reasonably raise a question: if Russia’s energy cut-off has inflicted no real damage on Poland, why did Moscow do it?

Seeing how the EU is slowly turning its energy plans away from Russian energy supplies and refusing to pay in rubles, Moscow wants to show that its threat of a gas supply cut-off is no joke. The Kremlin is thus making examples out of Poland, Lithuania, and Bulgaria (which also refused to pay in rubles and have likewise been cut off) to warn other states that are more vulnerable and dependent on Russian gas.

The head of the European Commission, Ursula von der Leyen, has announced a coordinated reaction from the EU, and has called Russia’s move “blackmail.” Some experts believe that Russia’s behavior reflects a sort of helplessness: it cannot counteract the direction in which EU energy policy is heading away from Russia. Putin has, nonetheless, raised some doubts in Brussels over the current state of energy security. Reportedly, ten European buyers have already opened ruble accounts in Russia, and four have even paid in rubles regardless of sanctions.

In short, the decision to cut gas supplies to Poland does not threaten Polish energy security, but it does affect the unity of the EU. Yet at the same time, the widely-held view of Russia as a solid, reliable gas supplier has been undermined, and will be in the minds of anyone and everyone buying gas from Russia. In long term, the threat to cut gas supplies may even backfire on Putin: instead of weakening their stances against Moscow, the EU member states’ determination for energy diversification might only grow stronger. To quote Fatih Birol, the executive director of the International Energy Agency, “Gazprom’s move to completely shut off gas supplies to Poland is yet another sign of Russia's politicization of existing agreements and will only accelerate European efforts to move away from Russian energy supplies.”

Jacek Płaza is head of the foreign affairs editorial team at Jagiellonian Club, a Polish conservative think-tank. He is also an advisor at East Analytics, a consultancy.