Poland to Provide Ukraine With Military and Humanitarian Aid 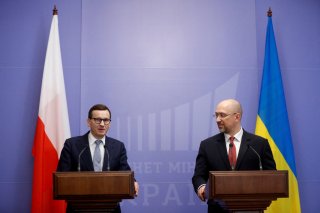 Relations between Poland and Ukraine can be traced back to the sixteenth century, but it wasn't until Ukraine gained its independence after the collapse of the Soviet Union that the two states began modern diplomatic relations. Controversies from their shared history remain, and their shared 328 mile border has not been without issue in recent years.

However, Poland has shown strong support for Ukraine in recent years. While Warsaw and Kiev may never be best friends, the two are becoming staunch allies in the face of Russian aggression.

At a briefing on Tuesday morning, Polish prime minister Mateusz Morawiecki offered his support to Ukraine before flying off to Kiev.

"Of course, we stand in solidarity with our Ukrainian neighbors in light of the threat they are now facing from Russia. However, solidarity and words are not enough today; now they need to be forged into action," Morawiecki said. "For this and other reasons, which are related to the very threatening military situation, which, unfortunately, has developed there, we are also ready to hand over defensive weapons."

Those weapons will reportedly include vast quantities of ammunition and various types of military drones. In addition, Warsaw has committed to sending the PZR Grom ("Thunder"), a Polish man-portable air-defense system (MANPADS) that is reportedly based on the Soviet-designed 9K38 Igla surface-to-air missile.

The PZR Grom has a 72 mm anti-aircraft missile set with a flight speed of 650 miles per second. It also features a single-use launcher and a thermal battery coolant assembly electric unit. It was designed to be operated by one soldier and can target low-flying helicopters and other aircraft.

On Tuesday, Morawiecki stated that he had talked with Polish president Andrzej Duda about the transfer of defensive arms to Kiev. He also stated that he would clarify what type of military assistance Ukrainians need to defend themselves against possible Russian aggression during his talks with Ukraine’s leaders.

This is Morawiecki's first visit to Ukraine in the capacity of prime minister, the position he has held since December 2017. Last autumn, the prime ministers of Ukraine and Poland met in person during the Economic Forum in Karpacz, Poland.

Russian president Vladimir Putin has repeatedly stated his opposition to Ukrainian membership in NATO as well as ties between NATO members and Ukraine. This week, Putin accused NATO leadership of ignoring his concerns.