Police in China are Using AI Helmets to Screen for Coronavirus 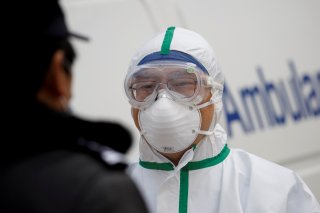 At subway stations, airports and other high-traffic areas in China, police officers are now using futuristic AI helmets to screen for COVID-19 infections.

The helmets, equipped with AR glasses, Wi-Fi, Bluetooth, and 5G connectivity, have already been deployed to Shanghai and other major cities.

Even with the vast array of equipment in the helmets, they are considered to be relatively lightweight because they are made from engineered metamaterials, which was developed with the help of the Chinese Ministry of Science and Technology. Metamaterials are artificial materials with properties that do not exist in nature.

These smart helmets use attached infrared cameras to quickly measure body temperatures in congested crowds. They can also scan QR codes and tap into facial recognition. If a person is showing signs of an elevated temperature, the helmet’s smart glasses will create a “digital record” and put that information in a nationwide database.

Following the rapid spread of the novel coronavirus, which likely originated in the city of Wuhan last December, the Chinese government has instituted highly aggressive quarantine measures.

China has registered more than 82,000 confirmed cases of COVID-19 and about 3,200 deaths, according to data from Johns Hopkins University.

About 75,000 people, however, have made full recoveries, and China is gradually easing lockdowns and travel restrictions in some hard-hit provinces. In fact, some sections of the Great Wall are now open, as are the highly popular Apple stores.

Many experts and officials worldwide have applauded China and South Korea’s efforts in curbing the COVID-19 spread. Although considered draconian in some circles, government authorities have relied on surveillance and big data networks to monitor and track citizens who may be infected by the virus.

In recent weeks, mobile applications and other tech have played a major role in tackling COVID-19. Just this week, Stanford University and Apple released a new app that aims to help connect first responders, who show symptoms of COVID-19, to drive-thru COVID-19 testing.

According to the World Health Organization, thermal scanning is an effective method of detecting people with a higher than normal body temperature, which is considered to be one of the major symptoms of COVID-19.