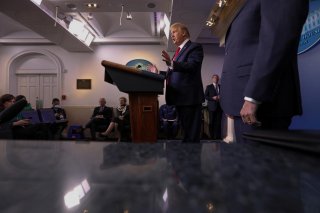 President Donald Trump is barely edging out former Vice President Joe Biden in a survey of voters in Michigan, Pennsylvania and Wisconsin.

Trump is up by a 48% to 47% margin on the former vice president across Michigan, North Carolina, Arizona, Pennsylvania, Florida and Wisconsin, according to a CNBC/Change Research survey published Wednesday. Biden’s team is trying to make the president’s handling of coronavirus the center point of the presumptive Democratic nominee’s presidential campaign.

Voters in those six states are torn on a range of issues, including which candidate will best handle the pandemic and potential economic recession, the poll noted. Nearly 49% of respondents in the survey approve of the overall job Trump is doing as president while he is pulling down similar marks with respect to his handling of the pandemic.

The poll came as Biden continues to hammer Trump over his response to the virus, which has killed more than 45,000 people since arriving from Wuhan, China. The economic lockdowns governors and mayors have instituted across the country to slow the spread have resulted in 22 million people filing unemployment applications since stay-at-home orders were implemented.

Biden’s campaign is pivoting on a dime as it attempts to level criticism against the president for supposedly being soft on China as Americans become critical of Beijing.

Critics lampooned the former vice president Monday for creating an ad targeting Trump’s supposed weak response to China. Biden’s ad accused the president of “rolling over for the Chinese” and letting 40,000 travelers into the United States from China.

A Politico poll conducted in early April found that 44% of voters believe the president would be a better leader compared to the 36% of respondents who feel the same of Biden. The same poll, published April 8, found more Americans would trust former President Barack Obama to handle the health crisis than either Trump or Biden.