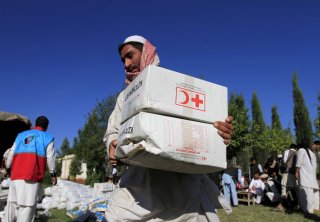 A powerful earthquake that struck eastern Afghanistan overnight on Wednesday has killed more than 1,000 and injured 1,600, officials from the country’s ruling Taliban regime have stated.

According to the U.S. Geological Survey, which put the magnitude at 5.9, the epicenter was in a mountainous area roughly thirty miles from the city of Khost, near the country’s border with Pakistan. It is the deadliest earthquake to strike Afghanistan in about two decades.

Per BBC News, the Taliban appealed for international help for rescue efforts as photos showed landslides and flattened mud-built homes in the province of Paktika. Taliban officials have asked the United Nations to “support them in terms of assessing the needs and responding to those affected,” Sam Mort of the United Nations International Children's Emergency Fund’s Kabul unit told the news outlet.

Meanwhile, U.S. national security advisor Jake Sullivan said in a statement that President Joe Biden was “monitoring developments and has directed USAID [U.S. Agency for International Development] and other federal government partners to assess U.S. response options to help those most affected.”

Sullivan added that the United States remains “the single largest donor of humanitarian aid to Afghanistan, and our humanitarian partners are already delivering medical care and shelter supplies on the ground.”

Giving a sense of the destruction, National Public Radio reported that Bakhtar News Agency uploaded a video of an unnamed man whose cell phone swung around to show homes that have collapsed.

“I'm doing this video to show that all people here are under the building,” the man says. “Under that house, five people. This house, six people.”

He turns to another pile of rubble and says: “And in this house, thirteen dead bodies still under.”

He swings his camera further up the hill and says: “All the village completely is destroyed.”

Speaking to Reuters, many locals described horrific scenes of death and destruction.

“The kids and I screamed,” Fatima said. “One of our rooms was destroyed. Our neighbors screamed and we saw everyone's rooms.”

Another individual named Faisal said that the earthquake “destroyed the houses of our neighbors. When we arrived, there were many dead and wounded. They sent us to the hospital. I also saw many dead bodies.”

Local farmer Alem Wafa told BBC that rescue teams had not yet reached his remote village of Gyan, considered one of the hardest-hit areas.

“There are no official aid workers, but people from neighboring cities and villages came here to rescue people,” he said. “I arrived this morning, and I—myself—found forty dead bodies.”

He added that many of the deceased were “very young children.”

Eastern Afghanistan is considered to be highly vulnerable to large earthquakes due to the fact that its mountains sit over an active geological fault line. Over the past decade, more than 7,000 people have been killed in earthquakes in the country, according to the UN’s Office for the Coordination of Humanitarian Affairs.