Precision Guided Artillery Could Shake Up Ukraine’s War with Russia 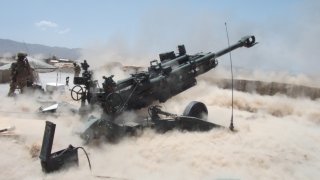 The Armed Forces of Ukraine may soon be getting GPS-guided precision artillery rounds, which could bring unprecedented attack possibilities and targeting technology to those defending against Russia’s invasion.

Much has been said about Ukraine receiving 155mm Howitzer artillery systems, and how those U.S.-supplied systems could help Ukrainian warfighters destroy Russian targets from stand-off distances in advance of attacks. However, less has been said about supplying the Ukrainians with ammunition. Are the Ukrainians receiving Raytheon’s GPS-guided Excalibur artillery rounds that are capable of pinpointing enemy targets to within one meter of accuracy from ranges out to 30km or more?  Pentagon spokesman John Kirby would not confirm or deny reports that Ukrainians were getting the Excalibur, but he emphasized that 155mm ammunition would be delivered.

“[W]e've talked about, you know, 155-millimeter rounds to go with those howitzers, and they continue to flow into Ukraine. I mean, between the two tranches, between PDA seven and eight you're talking about almost 190,000 rounds total of 155-millimeter artillery,” Kirby said.

While it may be unreasonable to expect that Ukraine would receive the most cutting-edge Excalibur weapons, such as “shaped trajectory” rounds or laser-guided Excalibur S rounds, the Ukrainians may receive standard Excalibur rounds which offer GPS-guided precision targeting to Howitzers from ranges of 30 km or more. Precision rounds would be a vast improvement for Ukraine’s artillery forces, which could then more easily destroy harder-to-reach, high-value Russian targets and specific systems and platforms identified by surveillance systems, drones, and other command and control technologies.

Yet, according to the Defense Department, Ukraine does appear to be getting laser-guided, precision rocket systems, which could have a big impact in pinpointing and destroying some of Russia’s mobile command and control systems, launchers, and even moving vehicles. Should a drone or forward-operating ground unit have the opportunity to “paint,” or light up, a Russian target with a laser designator, then rockets can be specifically sent to precisely destroy targets that are otherwise difficult to reach. Precision weapons also introduce the possibility of so-called decapitation strikes, wherein enemy “leadership” can be accurately targeted should commanders receive new intelligence about the movements and whereabouts of Russian military leaders and other decisionmakers.