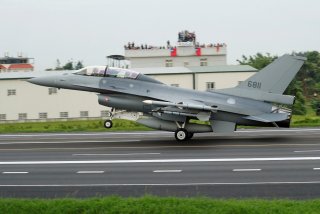 Although some American officials believe that the chances of a Chinese invasion of Taiwan are increasing, the small island nation wouldn’t go down without a fight.

Taiwan’s newly upgraded F-16V fighter jets will soon be fit for duty, according to a recent Taiwanese report. The F-16V, manufactured by Lockheed Martin, is the most capable F-16 variant to date and features an advanced Active Electronically Scanned Array (AESA) radar for better all-weather target acquisition and situational awareness. It allows the F-16V to track up to twenty targets simultaneously and gives pilots better target detail. The F-16V also features a new high-definition pilot display that allows pilots to better use and manipulate maps and is larger and more user-friendly than legacy displays.

Though the F-16V is a fourth-generation fighter and lacks the stealth capabilities of other platforms like the F-22 and F-35 stealth airplanes, Taiwan’s new jet will allow Taipei to better carry out air defense and interception missions—with both eyes laser-focused on China.

The background to this is a recent assessment by a top U.S. Navy official who believes that China could try and unite with Taiwan by force within the next six years. In testimony given to the Senate Armed Services Committee, U.S. Navy Admiral Philip S. Davidson stated the following:

“I think our concerns are manifest here during this decade, not only on the development—the numbers of you know, ships, aircraft, rockets, etc. that they’ve put in the field—but the way they’re advancing those capabilities as well in combination with everything that you just cited: Hong Kong . . . and Tibet, and a line of actual control in the South China Sea and the East China Sea,” Adm. Davidson stated.

Davidson explained more concretely that one of his major concerns would be China “accelerating their ambitions to supplant the United States and our leadership role in the rules-based international order, which they’ve long said that they want to do that by 2050. I’m worried about them moving that target closer.” More specifically, “Taiwan is clearly one of their ambitions before then. And I think the threat is manifest during this decade, in fact in the next six years.”

Late last year, Taiwan received a series of three arms deals worth $1.8 billion that included eleven HIMARS mobile rocket launchers, 135 Standoff Land Attack Missile Expanded Response (SLAM-ER) Missiles, as well as a total of six MS-110 Reconnaissance Pods along with related training, support, and maintenance equipment. Although the three deals, approved by the Defense Security Cooperation Agency, were deemed not enough to alter the military balance of power in the region, they would indeed augment the island nation’s ability to fend off a potential Chinese invasion force via the Formosa Strait.

Defending against a Chinese invasion would be no easy task, though modern F-16Vs may be able to tip the scales —ever so slightly—more in Taiwan’s favor by making it more complicated and costly for Beijing. Either way, Taiwan wouldn’t go down without a fight.