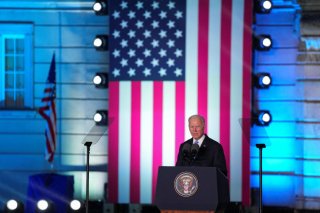 In a speech in Poland on Saturday, President Joe Biden excoriated Russian leader Vladimir Putin for his invasion of Ukraine, describing him as “a dictator bent on rebuilding an empire” and vowing that the United States would take any necessary actions to support the defense of Ukraine.

Biden took particular exception to Putin’s claim that he had launched a “special military operation” to “de-Nazify” Ukraine, which he described as an “obscene” mischaracterization of the Ukrainian government. Biden also directly addressed Russian citizens in his message, telling them that “this war is not worthy of you” and “this is not the future you deserve for your families and children.”

"We will have a different future—a brighter future rooted in democracy and principle; hope and light, decency and dignity; of freedom of possibilities,” Biden said in his remarks. Biden ended his speech by saying, “For God's sake, this man cannot remain in power." That comment caused an uproar, as it appeared to endorse a call for Putin’s overthrow, although the White House later distanced itself from this interpretation in a statement.

"The President's point was that Putin cannot be allowed to exercise power over his neighbors or the region," the White House statement said. "He was not discussing Putin's power in Russia, or regime change."

Biden later explicitly denied that the United States supports Putin’s overthrow when asked by a reporter after he returned to Washington, according to Reuters.

Russia’s war in Ukraine, which began on February 24, has failed to achieve most of its goals and has resulted in the deaths of thousands of Russian soldiers. The Kremlin has estimated that 1,351 of its service members have been killed and an additional 3,285 have been injured. These numbers are far lower than the most recent Ukrainian estimates, which suggest that 15,000 have been killed and many more have been injured. NATO has estimated around 40,000 total Russian casualties in the war so far, including dead, injured, and captured soldiers. If these numbers are accurate, Russia’s month-long war in Ukraine has become more deadly than its decade-long war in Afghanistan from 1979 to 1989, a conflict that played a significant role in the collapse of the Soviet Union.