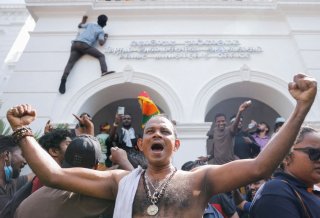 Sri Lankan president Gotabaya Rajapaksa fled the country on Wednesday, hours before his scheduled formal resignation following weeks of growing protests against his leadership, according to Reuters.

The Sri Lanka Air Force announced in a statement on Wednesday that Rajapaksa, his wife, and two of his bodyguards had left Sri Lanka in a military plane for the Maldives, three days after the president’s official residence was stormed by thousands of protesters.

“Under the provisions of the Constitution and on a request by the government, the Sri Lanka Air Force provided a plane early today to fly the president, his wife and two security officials to the Maldives,” the statement read. Other sources reported that the president had arrived in Male, the Maldives’ capital, earlier in the day.

Although the president, who had previously declared that he would not resign under “any circumstances,” agreed to leave office on Wednesday after the protesters breached his house, he has not yet resigned. However he reportedly pledged to do so by midday Wednesday. Following his resignation, appointing a successor will fall on the country’s unicameral parliament. Sri Lankan parliamentarians have stated that they intend to form a unity government after Rajapaksa’s departure, although it is not yet clear who would succeed him as president. The parliament is slated to vote for his successor on July 20. Before then, it is expected to have chosen a replacement for Prime Minister Ranil Wickremesinghe, who also offered his resignation over the weekend.

The protest movement against Rajapaksa, a former military leader who played a decisive role in ending Sri Lanka’s decades-long civil war, emerged in early 2022 as a reaction to Sri Lanka’s financial crisis. The crisis came about partly due to the COVID-19 pandemic, which hurt Sri Lanka’s tourism-driven economy. Rajapaksa’s government policies, including instituting massive tax cuts and banning chemical fertilizers—two actions that sharply reduced the country’s tax revenues and agricultural output worsened the situation. Sri Lanka’s budget shortfall and foreign debts complicated its ability to pay for imports of food, fuel, and essential medicines, leading to growing discontent with Rajapaksa and his younger brother, former Prime Minister Mahinda Rajapaksa, who was forced out in May.

Rajapaksa’s decision to leave the country may have been prompted by concerns that he could be arrested after leaving office. Although he has been accused of war crimes by human rights groups during the country’s civil war, the Sri Lankan president enjoys immunity from arrest while in office, preventing a potential criminal case from moving forward until his resignation.