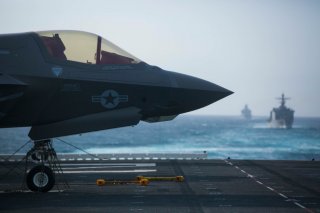 On Tuesday, the Trump administration formally informed the United States Congress of its intention to sell dozens of the Lockheed Martin F-35 Lightning II Joint Strike Fighter, along with other military hardware, to the United Arab Emirates (UAE). This comes as some experts suggested that President-elect Joe Biden might block the sale over Iran fears.

There are many “moving parts” in the deal, which was first announced in August and came about after the UAE formally recognized the Jewish state and normalized relations. However, there have still been concerns in Israel that the sale of the advanced fighter jets to the Gulf state would erode the Israeli military’s regional edge.

Israel’s Prime Minister Benjamin Netanyahu drew criticism for allegedly authorizing the deal as part of the normalization with Abu Dhabi, the Times of Israel reported. U.S. and Israeli officials have maintained that the sale of the fifth-generation stealth fighters was not directly tied to the normalization, but administration officials have acknowledged that the peace deal with Israel placed the UAE in a better position to purchase the aircraft.

The total arms package includes fifty F-35 jets, as well as eighteen Reaper drones and thousands of bombs and missiles. The UAE has sought to modernize its military due to Iranian aggression in the region.

Should U.S. lawmakers on Capitol Hill oppose the deal, they will have thirty days to introduce a resolution to block the sale. However, that would require two-thirds of Congress to override a presidential veto of the resolution.

Until the UAE normalized relations with Israel, the United States had flatly rejected requests from other Middle Eastern countries to purchase the F-35 out of concern that it would damage Israel’s “qualitative military edge” (QME), which the United States is legally required to preserve.

Will Biden Block It?

It has now been suggested that Biden could block the sale or at least alter the terms of the defense deal with the UAE, but some have suggested the president-elect could also halt the advancement of the Abraham Accords—the collective agreements among Israel, the UAE, and Bahrain.

While it seems unlikely Biden would want to derail the peace process, there have been suggestions he might put the deal on hold as such a regional alliance could infuriate Iran. Among the promises that Biden has already made is returning to the table with Iran and potentially reinstating the multi-party 2015 deal that limited Iran’s nuclear program. To get Tehran to agree could involve shuttering the F-35 sale.

In addition to the Abraham Accords, which were signed in September at the White House, the Trump administration has brokered a preliminary peace deal between Israel and Sudan, while other countries in the region are reportedly interested in similar deals Ynetnews reported.

However, some Democrats in Washington have called for a tougher approach toward Israel over its treatment of the Palestinians, and they have called upon the Israeli government to freeze the West Bank settlements and to release Palestinian prisoners.